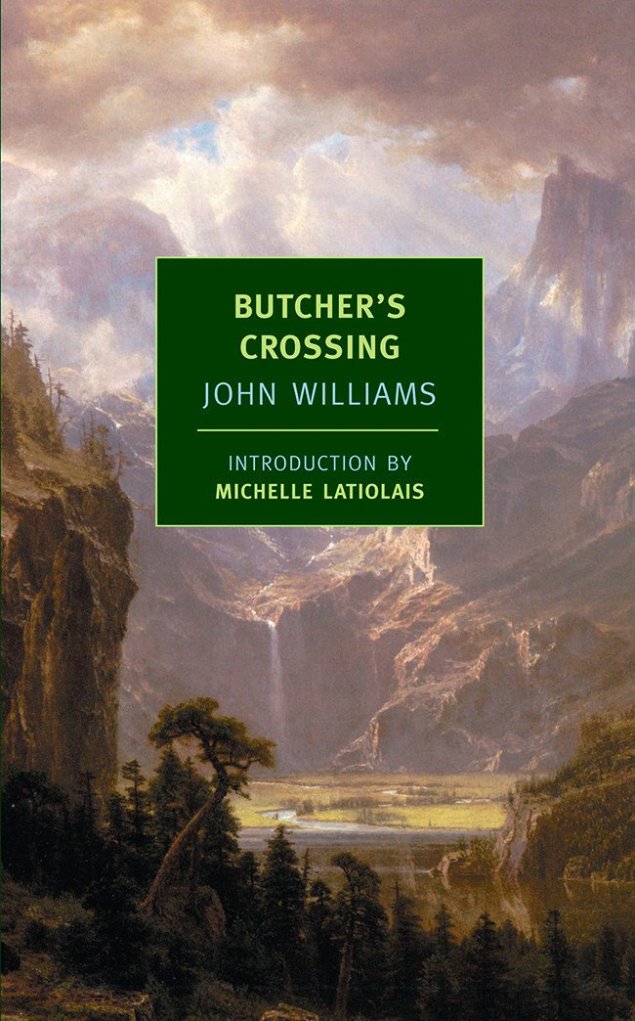 I first read and loved Stoner by John Williams back in 2010. Not long after that I bought his two other novels in print, Butcher’s Crossing and Augustus. The former is more or less a literary Western (I may have made that up) and the latter is a depiction of Augustan Rome. Whereas Stoner, an academic novel, is well within my reading comfort zone, the other two are well outside of it. That is why it has taken me eight years to get around to Butcher’s Crossing despite having heard from trusted readers that it is a great book.

The story centers on Will Andrews, a Harvard boy who decides he wants to head west and participate in a buffalo hunt. It’s unclear what motivated him to leave Cambridge for the western frontier but he quickly sets to bankrolling a buffalo hunt under the direction of grizzled hunter Miller who engages one-handed, drunken, Christian Charley Hoge and skinner Fred Schneider to complete the hunting party. They go off into the mountains of Colorado to find a herd of buffalo the size of which had not been seen in many years. But Miller is convinced it is out there despite the fact that he hasn’t been out that direction for about nine years.

What happens when they go looking for that herd is devastating and beautiful.

Devastating because Miller is hellbent on killing the entire herd. Every. Single. Buffalo. Over 4,000 of them. Devastating because the Anglo hunters only want the buffalo hides, unlike the  Native Americans who used every part of the animal to stay alive and killed in sustainable numbers. And Devastating because life can be bleak and short. (The modest rebound of the native bison populations is the only thing that kept me from totally losing it over the senseless and unsustainable slaughter. Because of over hunting and disease spread by cattle, the number of bison in North America went as low as 540 in the 19th century, but came back to a level of about 530,000 today, with about 15,000 of them being truly wild.)

But Butcher’s Crossing is also beautiful because Williams paints a picture of the truly wild west were few humans had trod prior to that time. It is as irresistible as it is hard to imagine, a broad valley in the foothills of the Rockies that is full of buffalo and coyotes with no imprint of humans anywhere. And really fascinating to me, a sky with no planes and no satellites, and the industrializing world at such a distance as to have no impact whatsoever. It reminds me of some of Willa Cather’s descriptions of the southwest, which included the presence of long gone native tribes, but were also evocative of an unimaginable, quiet isolation. The notion of weather and nature and time that has no association with humans. I keep harping on the no humans part because I find the absence of them comforting.

And then there is the Jack Londonesque sense of adventure and danger. Some of the things they endured, the ways they coped, and the results (which I will not divulge), are just as unfathomable to me as virgin territory. And like Jack London, John Williams writes well enough about outdoor adventures to draw in even the most committed city slicker.

Butcher’s Crossing is one of those novels that proves that good writing and good storytelling can overcome any aversion I  may have to a particular topic or genre.

Leave a Reply to james b chester Cancel reply