[All photo credits:Vivian Maier from the Maloof Collection.]

I’ve said it before that I am prone to hyperbole, but there is something about the documentary Finding Vivian Maier that makes me want to jump up and down and scream about it until every single person I know sees it.  In 2007 a young historian buys an auction lot of 30,000 photo negatives that he hopes will provide some illustrations for a book he is writing about his Chicago neighborhood. He doesn’t find anything for his book, but he does find an artist and a thoroughly compelling mystery. 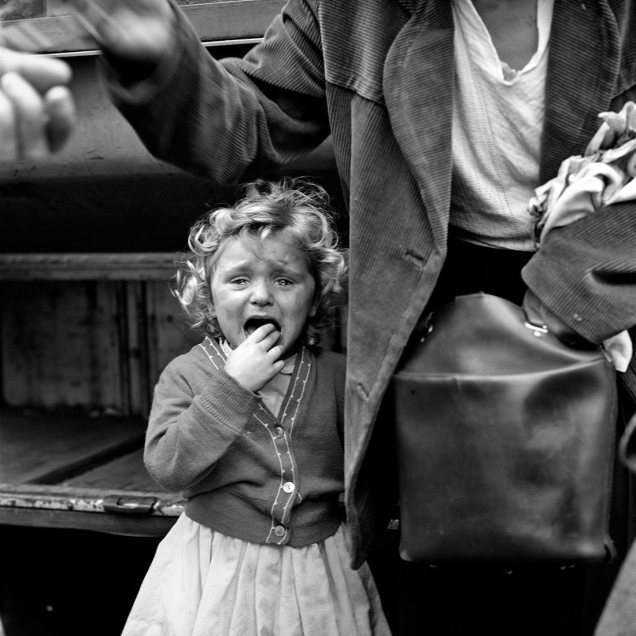 One does not have to be a mystery lover, a history buff, or a photography expert to fall in love with this story. But if you are one or more of those things, it is possible your head may explode. Here’s what happens: John Maloof buys a bunch of negatives at an auction. He discovers that the images are unexpectedly good, museum-grade, photos. He knows nothing about the photographer–only knows her name, can’t find even a whisper about her online. When he does track down information about her, he finds out she spent her life working as a nanny and never showed her photos to anyone. He also discovers that Vivian was more complex and darker than she seems at first.

I will say no more about plot and I deliberately left out details so I won’t give too many surprises away. Maloof reveals Maier’s story quite masterfully, setting up the mystery, taking us along on the investigation, and revealing the woman behind (and some times in front of) the camera. And it is an amazing story. It has the feel of a novel and it is ripe with possibilities for a novelist.

What will also be attractive to book lovers is the fact that there is so much in the film that will make the detective/historian/archivist in you tingle with excitement. After Maloof tracks down some people who knew Maier, he helps them clean out a storage unit that belonged to her. In the process, he ends up with thousands of rolls of undeveloped film, letters, receipts, tickets, clothing, hats, shoes, and hundreds of other things that help him unravel the mystery. In the film, Maloof lays out all the artifacts on the floor. It’s almost like he went to a store and bought a life/mystery in a box. A sort of life-sized game or kit that gave him just enough information and material to get him started but left big holes in the story for him to fill in.

This film appealed to me on so many levels. It reminds me of a few mysteries I have tracked down myself, but in much less spectacular ways. The time I tracked down the life of book cover illustrator Jackie Shulman and gave her a digital footprint that was all but non-existent previously. Then there was my 20-year effort to find the 1960s folk group The Womenfolk. The book I got to research and write about a 160-year old insane asylum. Playing around on Ancestry.com. You get the picture. I love that kind of mystery. Is it any wonder this film made me a little delirious?

They’ve recently added it to Netflix streaming which is how I came across it. The film came out in 2013 and was nominated for an Academy Award. As usual I am right on top of things.

23 thoughts on “An Electrifying Detective Story”