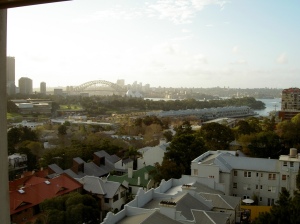 I am glad we went to Melbourne before we went to Sydney. Melbourne is a wonderful place but Sydney was so fabulous that it would have been a let down if we had gone to Sydney first. Not only that, but if we had reversed the order we would have been rained out in Sydney. But, as it turned out, we had beautiful weather while were in there. They were having unseasonably warm days in the mid-70s.
I know I am prone to hyperbole, but Sydney has got to be one of the most beautiful cities in the world. I know Travel+Leisure magazine thinks so. I could live in Sydney in a heartbeat–if only it wasn’t located half way around the world.
The pictures above were taken from our hotel room. The views were amazing and we could easily walk downtown, take the CityRail which was right next door, or walk through the great neighborhoods of Potts Point, Paddington, Surry Hills, and Woollahra.
Normally we would not do so, but we ended up staying at the Holiday Inn. We were originally scheduled to stay at a cheapish boutique hotel in the same neighborhood, but the bathroom was so moldy it set off the other Mr. MyPorch’s allergies. Not only was the Holiday Inn close, clean, and comfortable, but the views were great and it only cost $50 more a night than the depressing boutique where we spent our first night. It is making me rethink my automatic bias against big chains.