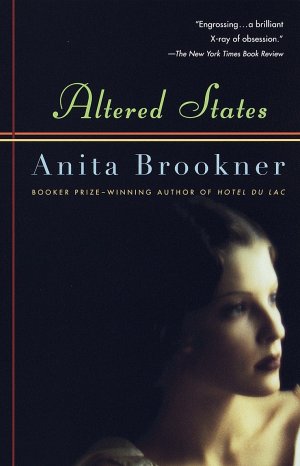 [I’m up to number 16 in my chronological re-read of all of Anita Brookner’s 24 novels.]

As I sat down to write this review this morning I found I needed to go over the second chapter pretty closely because I was getting some of the names and relationships a little bit confused. As I wrote who was who on the back of an envelope, it struck me as a bit Trollopian. I’m currently re-reading Dr. Thorne and Brookner’s relationship matrix in Altered States began to make me think of Trollope’s intricate social and familial networks. Brookner’s hero Alan’s mother Alice was the second wife of the father of her friends Sybil and Marjorie. Sybil and her husband Bertram have a daughter Sarah who is not just Alan’s obsession but also the obsession of Jenny the childless Polish wife of Sarah’s uncle (and Bertram’s brother) Humphrey.

Got that? Of course Trollope would have littered it with a few sirs and ladies but the feeling was the same. The fact that Brookner has Alice re-reading The Claverings and quoting Lady Mason from Orley Farm kind of makes the connection feel complete.

In some ways it isn’t all that important to really remember who any of the characters are since the plot distills rather simply down to Alan’s obsession with Sarah. Even the life and untimely death (not a spoiler) of his wife Angela is secondary to the presence, and absence, of Sarah. My oversimplification is meant to summarize rather than discount the fine detail that Brookner puts into the cast of characters and how they interact with and impact each other. In fact, all the other relationships seemed much more compelling than anything Sarah was involved in. Perhaps that is because I can get a little bored with unrequited love, but as I sit now thinking of it, it seems as if the main event–Alan’s fixation on Sarah–is really secondary to the rest of his life, at least as the reader sees it. No doubt the rest of the cast is secondary in Alan’s mind, but surely, it could be no accident that those are the people and relationships that Brookner really explores. Sarah spends most of the book offstage and never makes much of an impact when she is on the scene.

Alan’s ill-fated marriage to Angela, one of Sarah’s acquaintances, is one of those perfect Brooknerian sequences in which someone finds themselves married without really knowing how or why. Angela certainly trains her sights on Alan until he finds himself somehow engaged and then married. It’s possible he gets married to forget about Sarah, but it seems more likely that she simply wore him down. As the happy couple head off into their life together Alan seems to want to be alone.

I longed for nothing but a cup of good strong tea, preferably drunk in complete silence. Angela, I knew, would sit up half the night dispatching pieces of wedding cake, the very cake that was giving me such unaccustomed indigestion. I wondered if there were any precedent for a bridegroom wanting to spend his wedding night on his own.

The fact that this was more or less the high point of their marriage says quite a bit. But, as I alluded to, Altered States really isn’t about Alan’s marriage. There is a matrimonial tragedy that Alan has to live with the rest of his life, but stronger than any remorse or regret is an underlying sense of I wonder where Sarah is.

One thought on “Altered States”