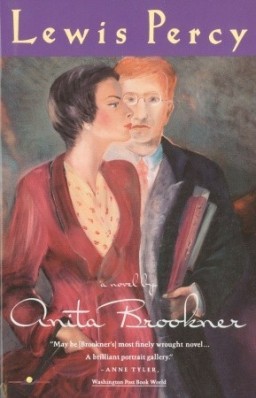 [Number 9 in my chronological re-read of all of Brookner’s 24 novels.]

When people ask me where they should start with Brookner, I never know quite what to tell them. Part of the problem is that after having read all 24 or them over the course of about a decade, I didn’t really remember enough detail about any of them to really provide a recommendation. I would often default to Hotel du Lac merely because it was her best known and had won the Booker Prize.

Now that I am nine books into my re-reading of all of Brookner’s novels I can say I am much more aware of the differences in the stories and much more appreciative of the variety and depth of her output. And perhaps no more so than with Lewis Percy. And I think, out of her first nine novels, Lewis Percy is a fantastic place to start. Slightly more plot driven than her other novels and with a much younger protagonist.

Our eponymous hero is a 20-something scholar working on his doctoral thesis in Paris. Not long after Lewis returns to London from his year in France, his mother dies and he finds himself a bit untethered. Perhaps having read too much of his mother’s kind of fiction he comes up with a romantic, heroic, and ultimately misguided, notion that he is going to transform Patricia “Tissy” Harper, a young, virginal, agoraphobic librarian, into something much greater by marrying her. I don’t have to tell you that things don’t really work out that way.

Acting the part of the perfect Edwardian wife–albeit in the 1960s–Tissy achieves an outward transformation with updated clothes and hair befitting her age and the era, but it doesn’t translate much beyond that. Not necessarily aware of the paternalistic idiocy of his plan Lewis senses the failure of his marriage but figures he has made his bed and needs to be faithful. Despite falling in love with Emmy, his gay best friend’s actress sister, he repels her advances only to have Tissy believe he was unfaithful. She flees back to her mother’s house, Lewis tries to be a responsible absent father, and no one is happy. Eventually Tissy finds her emotional feet, Emmy and Lewis realize they can’t be together, and Lewis gets a generous academic job offer in the U.S.

And that, my friends, is a lot of action for a Brookner novel. Although her characters are fabulously old fashioned, I also loved Brookner taking on younger characters and nodding to the swinging 60s. In Lewis Percy the reader gets the opportunity to experience a hopeful ending while getting lashings of introspective, complacent, ennui typical of Brookner’s characters. This could be the gateway drug of Brookner novels.

(On a completely unrelated note and apropos of nothing, I also loved the advent of the computer at the library where Lewis worked for years on an index (of what I don’t recall). Lewis is unsure if he wants to stick around to learn the new technology. In trying to convince Lewis to embrace the future and the future of the index, his boss makes this fabulous statement:

‘But my dear fellow!’ exclaimed Goldsborough. ‘This will be the index’s finest hour!’

As with Pym’s No Fond Return of Love, I do love an index in a novel.)

[For more on Brookner and an ongoing guide to Brookner’s London, check out the website for International Anita Brookner Day.]