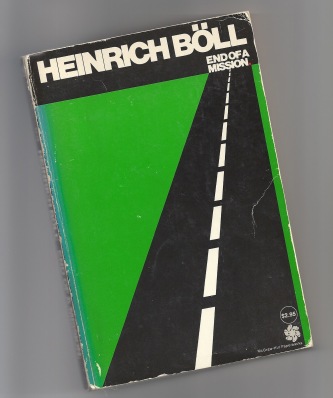 For a short time there was a great little travel bookstore here in DC. What made the store unique is that they would tuck in amongst the travel guides and travel writing works of fiction representative of each country. It was there that I stumbled across my first Heinrich Boll, The Lost Honor of Katharina Blum. I ended up loving the rather spare, precise way that the story unfolded. Since then I have read two other Boll works and liked them less. And with this most recent title I am left wondering if I truly like Boll or just liked that one book. At only 206 pages I assumed that I would fly through End of a Mission. But that wasn’t the case. Since I bought the book sometime back in 2009 it has been in my nightstand. There have been many times I thought I was in the mood to read it. I even took it on several vacations. Yet it stayed unread for a long time, always returning to my nightstand. Several months ago I finally got into the rhythm of the book and started to enjoy it. But even then I got distracted by some other book about half way through it and so it sat for at another couple of months until the TBR Dare made me face all of my nightstand reading with renewed committment.

So what is this book about? The whole of the narrative follows the trial of a father and son who have been arrested for setting fire to an army vehicle. I think part of my disappointment in the book is that I was expecting a different kind of book. I thought that there was going to be some great reason for their action and expected more of a plot. Instead End of a Mission is like a tableau of personalities. Taking place in a small village every character is truly a character. All of the quirkiness of village life and relationships are played out in the descriptions and actions of everyone from judge to bailiff, to lawyers, police, witnesses, innkeepers, observers, the press and of course the accused father and son. It also took me a while to realize that much of the book is meant to be humorous. Throughout the book Boll shows the somewhat absurd juxtaposition of a society that likes rules at the same time that it seems to be rebelling against them. Perhaps it is in the wake of World War II and the role of law and order in the Holocaust that prompts these small town Germans to want to thumb their noses at authority. But even then there is an almost orderly quality to their small acts of rebellion. Being at least one quarter German and one quarter control freak, I often feel an affinity for the stereotype of German precision and linear thinking. I had a history professor in college who abhorred any attempts to define a national character, either for individuals or for the collective society. But darn if it isn’t satisfying to trade in generalities sometimes.

There were moments that I enjoyed, and there are many aspects that would make End of a Mission a good book for discussion. But not a book club discussion. I think it would do much better in a more academic setting, and one that was focused more on German post-WWII history rather than one specifically about literature. For these reasons I am wavering between giving this book a 5 (ambivalent) on the My Porch Scale or a 6 (almost liked it).

4 thoughts on “Book Review: End of a Mission by Heinrich Boll”