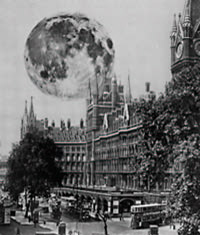 I was 80% finished with a pretty good (and lengthy) review of the The Hopkins Manuscript when I lost my data. I did one of those too quick keystroke combos that highlighted all my text and then wrote over everything as I unknowingly went on to type another word. In a second poof, gone. And not a damn “undo” button in site.

I had been intrigued by The Hopkins Manuscript from the moment I looked at my first Persephone catalogue. But for some reason I didn’t order it when I chose my first twelve Persephones. I think I wanted everything in those first books to be jam and Jerusalem, and there didn’t seem like there would be much cozy in a dystopian novel about the end of the world. I realize now that I was wrong on a few counts. Not only is there a certain coziness to much of the book, but the cataclysm of the moon crashing into Earth takes, rather perfectly in many ways, the thematic place of World War II – something common to many other Persephone titles. Indeed the fact that The Hopkins Manuscript was published in 1939 means that Sheriff could have only been aware of the rumblings leading up to WWII. Yet much of this survival tale seems prescient, and the accompanying highs and lows of human nature depicted could just as easily be applied to the WWII experience in Britain.

As a member of the British Lunar Society, our hero, champion chicken breeder Edgar Hopkins, learns months ahead of the general population that the moon has slipped its moorings and is headed toward Earth with ever increasing speed. What follows in the months that Edgar must keep the secret is an interesting, if somewhat odd, exploration of Edgar coming to terms with his final seven months on Earth. I have been trying to figure out how to describe Edgar. The word ‘prig’ comes to mind. A retired bachelor drawn very much like the stereotypical female spinster. Generally capable and content but with a deep well of loneliness and much too worried about the small stuff in life. Jodie at Book Gazing does an excellent job summing up Edgar:

He is a man obsessed with niggles, who inflates the importance of the smallest insult or honour to incredible proportions. He is rather petty and although he sometimes realises how ridiculous his behaviour is after the fact, he always finds some way to justify his thoughts to himself. He will probably remind readers of the phrase ‘a bit of a stuffed shirt’ and is a harmless character, though sometimes his thoughts tip over into small, spiteful ideas that have a little too much righteous conviction behind them.

Some of the 1930s-era content can seem naive given the rather breathtaking scientific leaps of the past 80 years, but this doesn’t really diminish the novel’s ability to draw the reader in. During the few days I was reading this book, there were times when I noticed something about the sun or the moon and thought of it in the context of the The Hopkins Manuscript before remembering that it was not really true. It is also the case that knowing the general plot (moon crashes into earth) does not diminish the book’s suspense in any way. There is so much to learn about how and when and why and what happens next that it is hard to put the book down until you know all.

The book is also filled with many poignant moments of individuals and society coming to terms with the end of the world. It really made me think a lot what I would do in the same situation. Different than knowing that I might die from a terminal illness, but the possibility that humankind may perish from Earth or the entire planet itself may disappear into a million little pieces. And appropriate for many of us, what does one choose to read with only limited time left? Edgar first finds out the world has seven months left. What do you do with your TBR pile when you put it in those terms? What about your final hours on earth? You are healthy, mind as good as it ever was. What do you choose then?

I went to my bookcase. My hands moved instinctively away from the classics – the heavy books of history and philosophy that have helped me through unhappy times in days gone by. Instinctively I went to an obscure, untidy row of books in the corner of the lowest shelf: the oldest friends in my library – the treasures of my boyhood.

For as much as most of us love to read, we probably have other things we would rather do, people we would want to spend time with. But assume for one minute that you have said your goodbyes and have chosen to be alone when the end came. Are you calm enough to read? Do you obsess over what the end might be like? Do you want to think about happy times? About regrets?  Let’s say you want to read. Do you choose and old favorite? Do you try something new? Will it be Jonathan Franzen or the Booker short list or something like that? Will it be the eternal truths of poetry? A picture book? People magazine?

(Let’s also pretend like you have made your peace with your god, so please no holy books…okay, you can say “The Bible” or similar, but then please follow it up with something else…you aren’t running for office after all…)

17 thoughts on “Book Review: The Hopkins Manuscript by RC Sheriff”