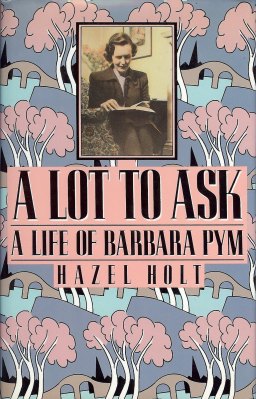 A Lot to Ask: A Life of Barbara Pym
Hazel Holt

I read my first Barbara Pym novel back in April 2002. It was Crampton Hodnet and I must admit I remember nothing about it. I remember that I enjoyed it in a mild kind of way. Later that year I followed it up with A Glass of Blessing and then again in 2004 with Jane and Prudence. In each case I remember enjoying them but not being able to remember a blessed thing about any of them. It wasn’t until this past August when I picked up Pym’s first novel, Some Tame Gazelle, that I really understood the brilliance of Barbara Pym. Not only did I thoroughly enjoy Some Tame Gazelle, but I actually remember what happened and think of various scenes from that book with some frequency and with more than a little amusement. So when I came across this copy of A Lot to Ask I couldn’t pass it up.

Hazel Holt, Pym’s friend, colleague, and literary executor has pulled together a short life of Barbara Pym using extensive excerpts from Pym’s diaries, correspondence, and published works. The result is a somewhat choppy, episodic narrative that nonetheless delights because it is rich with the same kind of detail that one finds in Pym’s novels. As I am with most biography, I was bored with the details of her childhood, but once Pym heads off to Oxford my interest started to quicken. And by the time she gets to writing novels I was completely enthralled. What becomes clear is how much of Pym’s fictional output is pulled from real life. Not necessarily autobiographical, but it does seem like Pym’s novel are repositories for a vast catalog of observations, experiences, and collected stories (gossip) that she picked up and recorded in her diaries over the years.

Not surprisingly I was particularly taken with passages that detail Pym’s interest in various authors and books. Her shared love of Ivy Compton-Burnett with her friend Jock led them to correspond with one another in the style of ICB. In practical terms this meant clever, funny letters with lots of dialog that read more like scenes from novels than correspondence. She also writes more than once of her love of Anthony Powell’s, six volume magnum opus, A Dance to the Music of Time. (I have the complete set and Pym’s encouragement from beyond the grave is moving them ever higher in my TBR pile.) And I am dying to find out more about Denton Welch, an author with whom Pym was “besotted”.

Perhaps the most difficult time in Pym’s life was the period in the 1960s and 70s in which her work was unpublishable. Having had six novels published between 1950 and 1961 Pym was devastated when her publisher, Jonthan Cape, declined to publish An Unsuitable Attachment. Even in her despair Pym recognized that the literary landscape had changed with the popularity of such work like William Burrough’s The Naked Lunch and Henry Miller’s Tropic of Cancer as well as the works of James Baldwin and others. Indeed it is hard to reconcile the dissonance of the era with the quiet challenges of a typical Pym story line. Recording everyday life observations in her notebook she bemoans the unfashionable quality of what she loves to write:

Mr Claydon in the Library – he is having his lunch, eating a sandwich with a knife and fork, a glass of milk near at hand. Oh why can’t I write about things like that any more – why is this kind of thing no longer acceptable?…What is wrong with being obsessed with trivia? Some have criticized The Sweet Dove for this. What are the minds of my critics filled with? What nobler and more worthwhile things?

It wasn’t until 1977 when the Times Literary Supplement included a feature on underrated authors in which both Philip Larkin and Lord David Cecil pronounced Barbara Pym as their favorite, that Pym’s career got back on track. Not only was her reputation (and publishing) revived but she achieved sales and accolades like never before. It was, however, a bittersweet revival given that Pym died of cancer only three years later in 1980 at the age of 66.

For anyone who likes Pym this is a must read. It has certainly put me in a Pym mood. I have already started on Excellent Women and am finding the experience all the more rewarding for having read A Lot to Ask.

11 thoughts on “Book Review: A Lot to Ask: A Life of Barbara Pym”