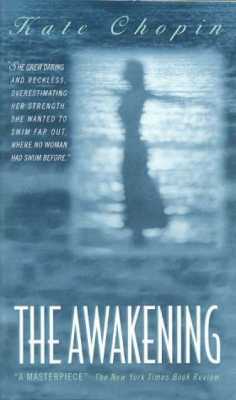 Almost immediately upon picking up The Awakening I realized it was a great book. I don’t have the appropriate expertise to explain why, but there was something so wonderful about the prose that it had my synapses firing away in joyful anticipation. And it wasn’t just the fact that I knew that it is a classic, there was something in the words themselves that had me convinced that I was going to be experiencing a great novel. Their styles aren’t necessarily similar, but it reminded me of the first time I discovered Willa Cather. Not only was the writing good, but the book also felt very American (I won’t even try to explain that) and although it is a bit of a period piece, it has a fresh feeling to it that was very exciting. I am trying hard not to oversell this book, but there is no denying that I reacted to it positively and viscerally from page one.

Published in 1899, The Awakening tells the story of Edna Pontellier a New Orleans society housewife who ends up throwing over convention in favor of her personal awakening. I won’t go into the plot because it is somewhat ridden with spoilers. Suffice it to say that the book was ahead of its time in dealing with the issues of female autonomy and the limited choices available to women during the period. In the process of telling the tale, Chopin wonderfully evokes well-to-do Orleans/Creole society. Not as Edith Wharton does with the very wealthy, old money New York milieu where their adherence to social mores seems innate, the society Chopin depicts has more of a self-conscious frontier quality to it. For Chopin’s characters their notions of society are inextricably intertwined with making money and getting ahead—nothing new in that—but it is a much more self-conscious, somewhat amateurish, rather provincial and parochial scene than the grand families of the East or in the old world. There is less room for eccentrics in Chopin’s world and this makes Edna’s choices much more limited and her non-conformance much more dangerous.

In case you haven’t figured it out yet, I highly recommend The Awakening.

12 thoughts on “Book Review: The Awakening by Kate Chopin”