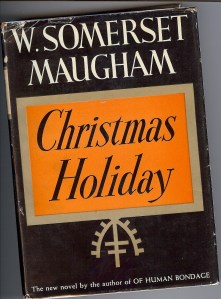 I couldn’t resist this opening line:

With a journey before him, Charley Mason’s mother was anxious that he should make a good breakfast, but he was too excited to eat. It was Christmas Eve and he was going to Paris.

Christmas Eve…Paris…breakfast. What could be better? If you pick this up hoping for a cozy holiday read as I did, you could be disappointed. But it is more likely that you will end up liking the book anyway. Charley heads off to Paris to see his old school friend Simon, look at some “pictures” (i.e., paintings at the Louvre) and meet some girls. Once in Paris Charley finds out Simon has turned into a bit of power-hungry, slightly disturbing, proto-dictator with socialist ideals. Pretty promptly after dinner the two head off to a brothel where Simon introduces Charley to Lydia, a Russian prostitute who later that evening accompanies Charley to midnight mass at Saint-Eustache. (How many of you plan to spend your Christmas Eve that way?) From there the narrative turns into the retelling of the circumstances surrounding the imprisonment of Lydia’s husband for murder.

Long (but interesting) story made short, Charley spends the week not falling in love or having sex but getting to know more than he probably wanted to about Lydia’s sad life and seeing a side of life he didn’t know existed. He also finds out what a freak Simon has become. Not surprisingly Charley returns to England a changed man. But even understanding that, I wasn’t quite prepared for the impact of the final phrase of the final sentence of the book:

It was a fact he had done nothing; his father thought he had had a devil of a time and was afraid he had contracted a venereal disease, and he hadn’t even had a woman; only one thing had happened to him, it was rather curious when you come to think of it, and he didn’t just then quite know what to do about it: the bottom had fallen out of his world.

I enjoyed this book, even for what turned out to be an unplanned re-read. I was about 80 pages into it when I realized that I had actually read it before. I checked out my “Read Books” spreadsheet and sure enough, there it was: January 21, 2001. I could forgive myself because this was one of the books I picked up in a secondhand store Thanksgiving weekend. Not having my list with me, how was I to know? However, this story has an ironic twist. Close readers of My Porch will know that I started keeping my “Books Read” list in 1994 when I found myself 30 pages into a novel I had previously read. And the book that prompted me to start the list? Cakes and Ale. By whom you ask? Wait for it… W. Somerset Maugham.

2) Maugham is always worth a re-read.