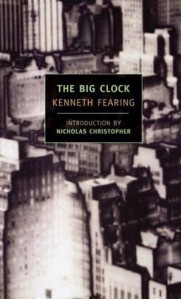 The victim is Pauline Delos, mistress to publishing magnate Earl Janoth who is also her killer. (Janoth’s publishing empire is strikingly similar to Time Inc. during the time of Henry Luce.) It turns out someone saw Janoth with Delos right before she was murdered. Trying to stay ahead of the police investigation, Janoth’s right hand man Steve Hagan uses a false premise to put crime-magazine writer and Janoth employee George Stroud in charge of finding the unknown witness. But it turns out that Stroud himself was the witness. Fearing for his marriage, his liberty, and even his life, Stroud has no choice but to lead the investigation. Compelled to use the full resources of the company, Stroud has to stay one step ahead of the 53 employees investigating a trail that can only lead to him.

I won’t say anymore about the plot. But I will say that I really enjoyed this book. Not much of a reader of mysteries, I may not be the best judge of how this stacks up with others in the genre. On the other hand, my outsider status should give assurance to anyone similarly inclined that you don’t need to be a mystery fan to like this book.

Raymond Chandler, perhaps a bit full of himself, had this to say:

I’m still a bit puzzled as to why no one has come forward to make me look like thirty cents. But except for an occasional tour-de-force like The Big Clock, no one has.

But I will let the wonderful Nancy Pearl have the last word:

Read The Big Clock to get a feel for Kenneth Fearing as social critic, spinning out an edgy corporation-as-hell thriller.

3 thoughts on “Book Review: The Big Clock by Kenneth Fearing”