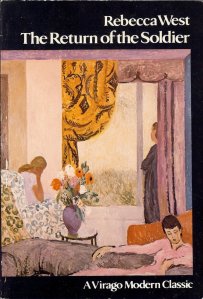 The Return of the Soldier
Rebecca West

At 185 pages, and with a really big font and really big margins, this one definitely falls into the novella category. But what a crackerjack little novella it is. Written in 1918, the essence of the plot is about Captain Chris Baldry, a WWI soldier who returns to England with post-traumatic stress disorder that leaves him with amnesia. He remembers Margaret, a love interest from 15 years previously, but doesn’t remember Kitty, his wife of 10 years. The fact that Margaret is of a lower class than his own, and perhaps more importantly, than his wife’s, is an added twist that really seems to drive the Kitty mad.

I think some of the class material is a little heavy handed and even some of the plotting is a little clumsy at times, but I really enjoyed this book. It was one that I found myself reading while walking down the street and riding in elevators because I didn’t want to put it down when I arrived at work. Which is a bit of a shame in some ways. There are moments in the book that compel one to want to read on, but much of the book is also rather atmospheric and would have benefited from more relaxed and sustained reading sessions. The final chapter makes for a pretty fabulous, but not necessarily happy, ending.

Victoria Glendinning’s introduction written in 1980 is rather un-illuminating. John thought it sounded like an uninspired term paper. Are introductions even necessary to most books? In some cases they helpfully explain context that enhances the main event (i.e., the narrative itself). But in many cases they seem rather gratuitous. A way to throw a few dollars, or in this case pounds, to a writer or academic. Not that I am opposed to that, but at least make them good. And more importantly, if an introduction or preface doesn’t help put things in context then make it an afterword instead. Don’t tell me what to think about a book before I read it. Tell me what I thought of it after I have read it (he said, tongue firmly in cheek). What do you think? Are introductions a gratuitous waste of trees?

9 thoughts on “Book Review: The Return of the Soldier”