Day four of our Sissinghurst adventure started with sun and ended with sun…well, and then a bit of lightning.

When my eyes popped open around 5:00 am with sunlight flooding our room, I decided not to fight it and went for a walk across the fields. The weather was gorgeously cool in the low sixties (he says as he types in hot, humid, DC) and it was fantastically peaceful. 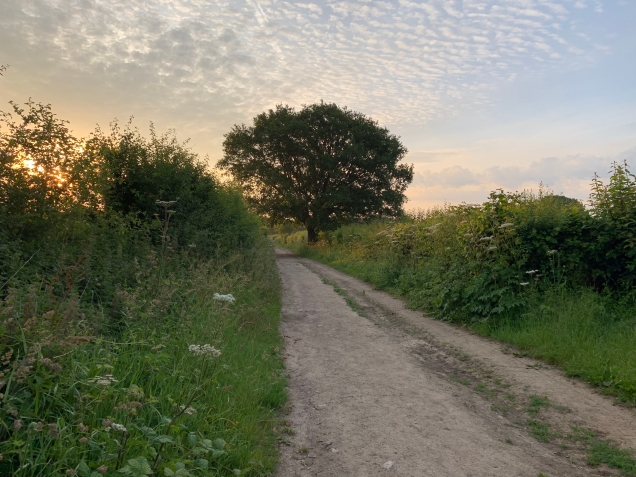 Just after lunch our young, charismatic, fun, smart, bookish, telejournalist, British friends,  William and Lorna, who Simon Thomas virtually introduced us to several years ago when they moved to DC, arrived for an overnight stay. After a very brief orientation, I sent them out into the gardens before it started to rain and so they would have plenty of time to see Vita’s study and the library before they closed. In the true spirit of the setting, I was pleased when they came back to the house and said they wanted to just chill out and read while it spitted rain.

When drinks time rolled around, the light rain had stopped, the sun was coming out, the garden was closed for the day, Lorna made Pimms Cups, and we went and sat in the boat house pavilion. After a bit we heard applause in the near distance. Something of some sort was going on in our garden.

A few minutes later a tall man carrying a champagne flute and bearing the visage of a Nicolson/Sackville-West appeared, introduced himself as Adam Nicolson and explained they were having a little event and that he hoped we weren’t inconvenienced. We assured him there was no problem at all, John fanboy’d for a bit, and I asked if there was any part of the garden he would like us to avoid. All of this was significant for a couple of reasons. First, this was the author Adam Nicolson–grandson of Vita and Harold–coming over to make sure we were okay with him using his ancestral home for a small event. Second, even though by this time in our stay we were pretty comfortable roaming the property at all hours, it was a whole new level of comfort to have Adam Nicolson welcome us and reassure us that his garden was our garden. Third, the event included Adam’s wife Sarah Raven who is a garden maven herself and John tells me has Martha Stewart level cache in the UK. Again John fanboy’d, albeit from a distance this time, when we walked by while she was chatting with some guests in the White Garden.

I wish I had a some sort of picture to represent this, but alas, I don’t.

For dinner we went to the nearby Three Chimney’s gastro pub for dinner where they happily still had the smoked haddock with creamy leeks on the menu that I had had about six years previously. Then it was back to the house where we strolled in the garden as it got dark and the sky started to fill with lightning. By the time we all trundled off to bed we were in the middle of a proper storm with lightning, rain, and thunder–or at least what passes for thunder in the UK.

5 thoughts on “The time Adam Nicolson came over for drinks*”