Until this month I had never made it to what is perhaps the world’s most famous opera house, La Scala in Milan. Since I wanted to spend at least a week in Italy in 2019 trying to improve my Italian, it seemed kind of natural that I combine that with finally hearing an opera or two at La Scala. Unfortunately La Scala’s schedule is not like the Met’s or some other opera houses where you can see two or more operas in the span of one week. The best I was able to cobble together was an opera on one night and a concert by the La Scala Orchestra and Chorus on another night.

Prior to seeing anything at La Scala I saw a performance of Rigoletto at the Teatro Regio in Turin. I will write about that more in the future, but suffice it to say that it was a well-sung, well-played production in a comfortable theater with good sight lines and good acoustics. That experience, in addition to La Scala’s reputation, had me expecting so much more than what I encountered at the venerable opera house in Milan.

My first performance at La Scala was an all Bruckner program that was supposed to have been under the baton of Christoph von Dohnányi. Since the elaborate program booklet had Marc Albrecht’s name in it, I assume it was not a last minute change. Thinking I was in for some world-class music making I was more than a little excited for Bruckner’s Te Deum and his Symphony No. 4. Working backwards, let me just say the orchestra was woefully inadequate in the symphony. They seemed sloppy and under powered.

In the Te Deum that opened the concert I didn’t really notice the orchestra too much because I was focused on the chorus. Thinking back to a performance of The Dream of Gerontius I saw by the Munich State Opera back in 2002, I was particularly excited to hear a high octane opera chorus singing a concert/liturgical piece. And the opening bars did not disappoint–a big, muscular, over-the-top, wall of choral sound. But after the initial thrill, it was clear the chorus was really just phoning it in. They seemed like a group of soloists who were underprepared and clumsy.  Why bother putting on a concert like this (that is, outside of opera) if you aren’t going to make an effort? 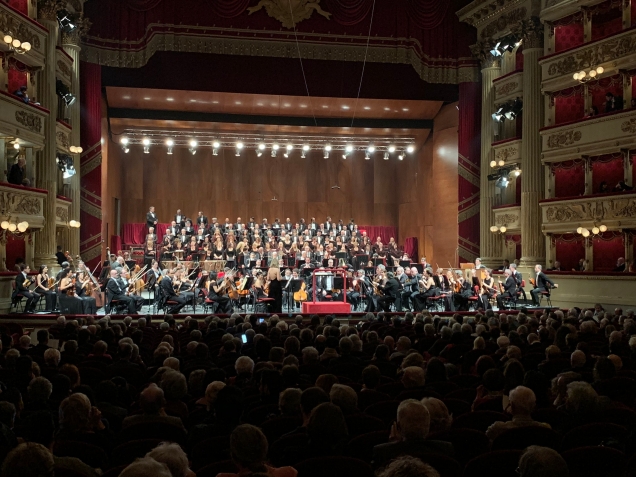 And then the soloists came in. Some were better than others, but the most distinctive quality of their sound was that they sounded like they were using microphones. I couldn’t really see speakers and couldn’t figure out why or how that could be, but their sound was very different than my ears expected. The sound of the orchestra and chorus was what one would expect–that is, the sound filled the room and it seemed to be coming from the stage. But the vocal soloists sounded like they were in the box with me at the back of the auditorium. This was particularly strange given that they were positioned on stage behind the orchestra right in front of the chorus. Rather than sounding like they were singing with or on top of the orchestra and chorus, it was as if one channel on the stereo was turned way up. Not being an acoustical expert, it is hard for me to describe, but their sound was too present. It didn’t feel of the room. It’s like they were being directly wired into my ear.

Flash forward three nights later to the performance of La Cenerentola. The orchestra, back down in the pit, seemed much more comfortable playing Rossini and they sounded worthy of the house. But then, as in the Bruckner Te Deum, the soloists sounded like they were using microphones. Their sound was so shockingly present in my ear that I was dying for a pair of binoculars to see if I could see the body mics on the singers. But I was also confused because I couldn’t see any sort of speakers anywhere. Where was that sound coming from? And then I began to notice that it didn’t seem to happen all the time. It appeared that, rather than wearing microphones, they were standing in, or passing through, an acoustical hot spot on the stage. One that brought the sound right to my seat without really passing through the atmosphere. As I thought about it, the area on the stage that seemed to be prone to this effect was about the same area where the soloists had stood for the Bruckner.

To be clear, both nights I sat in the front row of a box at the back of the auditorium just one level above the main floor. For the Bruckner I was just left of center, and for the Rossini I was right of center about three boxes closer to the stage along the side of the horseshoe. In both seats I experienced the same weird sound. Does it sound that way everywhere in the auditorium. Do other people think it sounds weird? When people talk about the great acoustics at La Scala are they talking about this rotunda effect like in the Whispering Gallery at St. Paul’s in London which I found so off putting?

I admit I am no expert on acoustics but  I have been in many, many opera houses* and have never experienced anything like this. What’s up? Am I crazy?

No matter how you slice it, I really don’t feel like I need to ever go back to La Scala. Come to think of it, even with unlimited time and resources I don’t think I would ever choose to go there again.