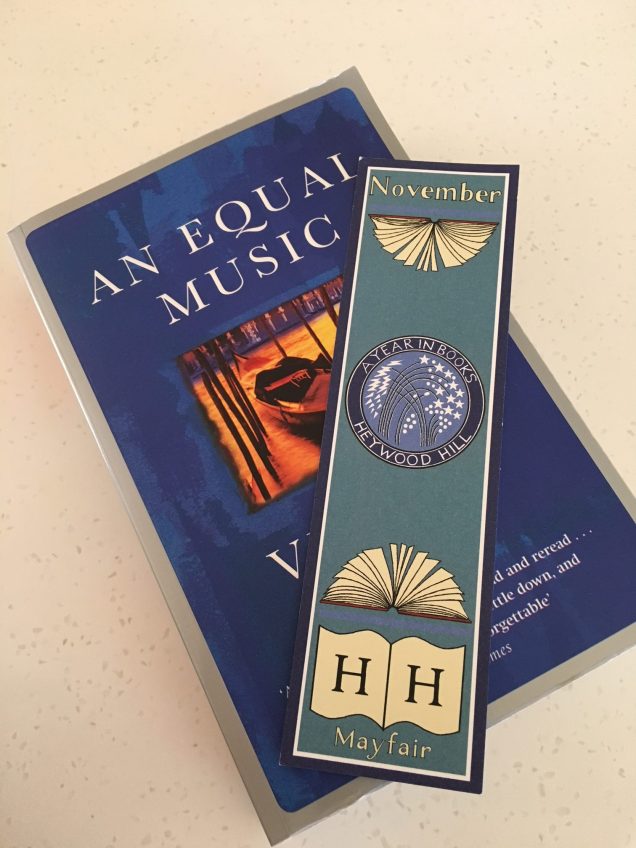 I’ve received and read my second Year in Books delivery from Heywood Hill, and their bespoke service is growing in my esteem. This on top of an already great first delivery. The logical part of me realizes that they have competent booksellers who read my detailed consultation information and are pulling books for me that they think I might like. But then another part of me is convinced that one of them is living inside my brain sending radio signals back to Mayfair telling them what to wrap up and send my direction. Of course, ever the doubting Thomas, another part of me is convinced they have made two lucky guesses and next month it will all crash and burn when they send me Eat, Pray, Love. But I kind of doubt that third scenario.

This time around was Vikram Seth’s 1999 novel An Equal Music. I’ve read Seth’s doorstopper A Suitable Boy which I enjoyed but perhaps not enough to look at what else he has written. And clearly I must have said something on my consultation form about liking novels about classical music. But on that point I was still a bit trepidatious. So many books with classical music as a subject, or even background, can really come off as forced, self-conscious, exercises in name dropping (cf., both of Alexander Chee’s novels).

Although my intention with my Heywood Hill subscription is to read each novel the month it arrives, I was a bit surprised how quickly I picked this one up. One night before bed I was between books and, as I sometimes do, I gathered 5 or 6 titles I was considering reading and read the first three or four lines out loud to my husband and then had him tell me which one sounded the most interesting to him. There were a lot of really good options, and An Equal Music wasn’t the one John picked, but before putting it down to start on the book I thought I was going to read, I read a few more lines of the Seth, and then a few more, and before I knew it I was all in.

This book was everything I wanted it to be. It was smart without being too smart, I was easily swept up in the characters and the story, and the musical details were expertly woven into the book without ever feeling obvious. And for me, it was unputdownable. The kind of book that made me turn off the TV, had me staying up far too late, had me reading at 6:00 in the morning before I went to work, had me trying to juggle a Ruben sandwich and the book at the same time, and was engrossing enough to allow me to ignore airport chaos. An utter freaking delight.

Having said all that, it is possible that this book might not work if you aren’t a music nerd–or perhaps if you are too much of a music nerd. I think I am probably at the right level of musical nerd-dom. Too little and you might find the discussions of musical keys and time signatures confusing. Too much and you might find those same discussions laughably unrealistic. But on the latter end of the spectrum I don’t know. I wonder what a real musician would think of this novel. And I love a novel that provides its own soundtrack that one can look up online and listen to immediately, as one reads. An Opus 1 Beethoven trio that gets turned into a quintet later in Beethoven’s life as Opus 104, yards of Schubert, heaps of Hayden, glances of Brahms and Mozart and Vivaldi.

Beyond the music, if that is possible, is the lovely, sometimes heartbreaking story of violinist Michael Holme who walked away from Julia, his piano trio and his piano-trio partner and piano-playing girlfriend 10 years earlier because of what he perceived as an incompatibility with his mentor. Finding the teacher/student relationship overwhelming and fraught with unpleasantness Michael flees from Vienna and waits too long to get back in touch with Julia. In the intervening decade no one in Julia’s life will tell him where she is, and this being the gloriously old fashioned days before the internet juggernaut we know and love today, he is unable to track her down. Until one day he sees her on a bus headed the opposite direction. The two do meet again and, well, I’m not sure I am allowed to tell you what happens next.

Beyond the relationship angle, if that is possible, Seth creates completely compelling back stories and numerous subplots that definitely provide the complete package. Michael’s family, his violin, his musical upbringing, the relationship within his string quartet, programming concerts, deals with agents and managers and record companies, looking for gigantic violas, bidding on violins…all of this appeals not just to my love of details but all those gossipy behind the scenes things that happen in the world of classical music. I’m not sure how this would play (no pun intended) for those who don’t know or care about such details. For me it was like being dropped into a pool full of hot cocoa and floating around on a toasty marshmallow. That’s how much I love that kind of stuff.

And then there is Venice. This is another point where I am certain the Heywood Hill team is living in my brain. We are headed to Venice in June and I relished the scenes that took place there. Like his writing about music, Seth includes lots of details without making you feel like he is trying too hard. And again, the internet brings it all to life as image search after image search provided a brilliant background to the text–not that one needs it, the imagination, etc., but it is quite fun.

So there we are. Another successful pick from Heywood Hill. They are 2 for 2. Two very different books about very different things. I love the variety. Have they peaked too early? Stay tuned. 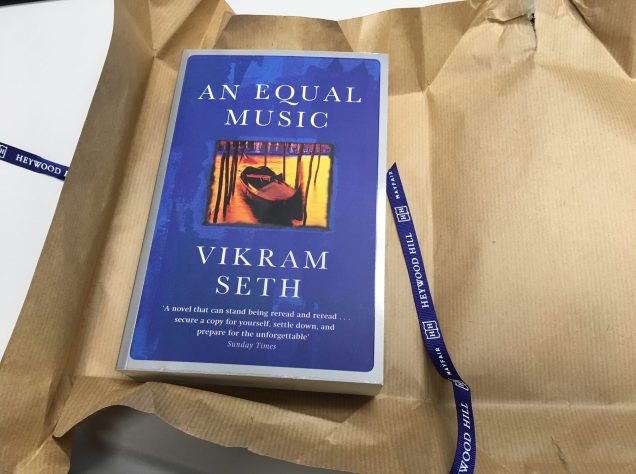 16 thoughts on “Heywood does it again”