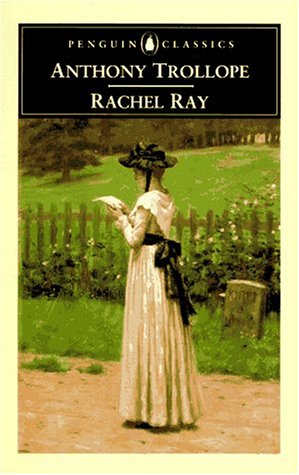 Regular readers know that I am a big Trollope fan. When people ask where they should start with his novels I never know quite what to say. My first Trollope was the The Warden the first of the Barchester series, but I like all of the Church of England detail and intrigue peppered throughout those novels. The Pallisers series to me is less accessible with the amount of political detail included–although The Eustace Diamonds stands really well on its own, but then again, it is in the middle of the series and I know people usually like to start at the beginning. I have also enjoyed other good stand alones as well like Dr. Wortle’s School and Three Clerks.

And then came Rachel Ray. It might be my new favorite Trollope and I think certainly his most accessible that I have read. This would be the perfect book for someone wanting to give Anthony Trollope a try. It has a bit of the church thing, a bit of the political thing, romance, thwarted romance, nosy widows, greedy clergy, curmudgeons, and the virtuous. And, of course, lots of talk about how much money everyone makes. That is always my favorite part of any Trollope novel.

Rachel Ray is as goodhearted as a human can be with a loving but weak widowed mother and an overly pious widowed sister. And then Luke Rowan comes along, handsome, with a comfortable income and great future prospects…but is he all that he seems? YES, of course he is. You know from the start what is going to happen, but you don’t know how it will happen or how complicated things will get before they work themselves out. I really did find this to be a delightful page turner.

Something needs to be said, however, about the level of anti-Semitic content in Rachel Ray. Much Victorian literature is antisemitic to a certain degree, in fact there is much English fiction well into the 1950s that has flashes of antisemitism. Usually in Trollope it pops up here or there in passing without being an actual part of the story line. In Rachel Ray it is, however, part of the story. A candidate for Parliament is considered completely inappropriate for office based on the fact that he is Jewish, and much is made of that fact. And it isn’t like Trollope includes it to make a critique of antisemitism, because all of the heroes in the book are the ones advocating against electing a Jew to Parliament. Given how progressive Trollope is on other ways, I choose to believe that if Anthony Trollope were alive today, he wouldn’t be antisemitic and write such stupid scenes. Why do people have to be assholes? Sigh. Have I mentioned recently how much I hate Donald Trump? Big sigh.

14 thoughts on “The Trollope gateway drug”