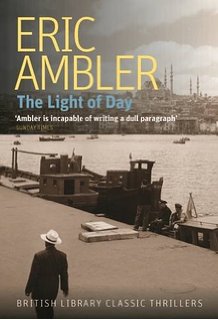 With just over four months left until the end of the year, and fall approaching, I am just 34 books shy of my 104-book goal for 2016. That seems eminently doable. Particularly since I have cut way back on my Twitter, Facebook, and any other media that purports to show me news. I just want to wake up to good news on November 9th.

The Light of Day by Eric Ambler
Not only am I am big fan of Ambler, but this one is definitely one of my favorites, and it was the perfect thing to read on a lazy day on our recent trip to Maine. A petty thief in Athens gets caught up in high stakes international tomfoolery that takes him to Istanbul. All the Ambler hallmarks I love. I need to come up with a better way of describing this kind of thriller. Pre-computer, analog, Interpol, international borders, pieces of paper, time tables, pre-globalization, all that kind of stuff. I think this one is meant to be a bit comical, which it is, but not so much that you can’t easily ignore it. Also the basis for the film Topkapi, which I must rent.

The Rainbow and the Rose by Nevil Shute
Highly possible this one is tied for first with the Ambler–they definitely share much of the analog, vintage world that I seem to crave more and more, but Ambler is clearly a much better writer. Sorry Nevil. I still love your books to bits. A 1950s story of a daring rescue mission to a remote area of Tasmania. But really the bulk of the novel is the story of the pilot being rescued and his life in England between the world wars. As usual with Shute, I love that his characters are can do, competent, smart people who always do the right thing. And instead of lots of tomato juice (like in In the Wet), this one seemed to have lots of cold milk. That’s good stuff.

A Moveable Feast by Ernest Hemingway
I sometimes bristle at how fashionable it is to disparage Hemingway’s writing style and testosterone laced personality. Well, A Moveable Feast gives the haters all the ammunition they need. Lots of very short sentences and he-man attitude. I did, however, thoroughly enjoy it and particularly liked the road trip he took with F. Scott Fitzgerald. Either Hemingway defamed Fitzgerald’s character or Fitzgerald was a whiny bitch. Perhaps both.

The Road to Little Dribbling by Bill Bryson
Normally I’m a big fan of Bryson and I liked much about this book. But overall I felt like Bryson might have crossed over from lighthearted irascibility to cranky old man. Dribbling is a sequel of sorts to Bryson’s earlier take on Britain in Notes From a Small Island which I really liked when I read it a million years ago. I found not much new or fresh in Dribbling and found some of his cranky humor to feel just cranky and not particularly original. Where Bryson does shine is in pointing out that with so much money flying around these days do we really need to reduce our physical world to the cheapest, ugliest options available.

Leap Year by Peter Cameron
You know that I am a HUGE fan of Peter Cameron’s most recent novel Coral Glynn. I think it is extremely well-written, well-plotted, and well-paced. I was also a big fan of his novel Andorra.  And to a lesser degree I also liked his novel The Weekend.  But Leap Year? It felt dated and much, much less accomplished or even interesting. Based on the four Cameron novels I have read, I think he is a writer who has gotten better with practice. Leap Year was published in 1990 and his first novel. The Weekend was five years later and was markedly better. Andorra was another two years after that and was two years better than The Weekend. Published in 2012 Coral Glynn was 15 years after that and easily 15 years better. If my theory holds, the two books published between Andorra and Coral Glynn should be pretty darn good. Here’s hoping.

The Trouble with Goats and Sheep by Joanna Cannon
Sigh. Unfortunately, I think this is another case of the emperor having no clothes. Or at least clothes she does have are insipid and one-dimensional. After a while I began speed reading just to get to the end.