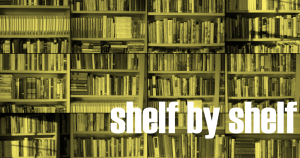 I have no shelf that is made up of just one author. With each shelf holding somewhere upwards of 30 books, I doubt I will ever achieve that particular kind of monoculture. Although I probably could with DE Stevenson if I end up collecting all of her novels. (Even in that case I would have to arrange them so that they all fall on one shelf–but of course I can see myself doing just that if the time ever comes.)

The problems of monoculture overtake me whenever I take some time to organize my shelves, or weed, or just gaze at them. For those authors I love (Ambler, Atwood, Brookner, Just, Pym, Shute, Stevenson, Trollope, etc.) what happens when (if) I collect all of their work? Kind of satisfying as an activity and also nice for re-reading old favorites. But collecting prolific writers can mean a lack of diversity if one has limited shelf space. In some cases (e.g., Atwood), I no longer feel the need to keep everything an author has written. In other cases, I think at some point, favorite authors might be relegated to special shelves elsewhere in the house. But since those shelves don’t yet exist I’ve started to wonder whether or not I want to keep every novel.

Issues of relative scarcity in the marketplace for some author’s work mean that I am also more inclined to keep all of their books regardless of how much I like a particular volume. Which brings me to this week’s shelf. E.F. Benson is a delightful author best known for his Lucia series, but is he worth all this shelf space? I’ve only read one of his non-Lucia books. Do I like him that much? I don’t know. But I do know I have found lots of copies of his other work at a charity shop here in DC and haven’t been able to resist getting them. I guess I will find out at some point. In the meantime, I’ve put my boxed Folio Society set of the Lucia books elsewhere as they take up a fair amount of shelf space. This allows me a bit more room for his other works which may or may not get weeded out over time.

This week also marks the first example of the horizontal stack. When one can save an inch or two my going up instead of side to side. I think it also adds a nice visual break .

Bates, H.E. – A Bit of French Air
Bates, H.E. – The Purple Plain
When I was at Powell’s last summer I found this beautiful copy of A Bit of French Air. One of Bates’ Pop Larkin books, I have no idea whether I will like them. I also have a Pop Larkin omnibus that I don’t have on this shelf. If I read that and end up not liking them, I probably will keep this one because the edition is so cool.

Bechdel, Alison – Are You My Mother?
Bechdel, Alison – Fun Home (completed)
When I was in college I loved reading Bechdel’s comic strip Dykes to Watch Out For in Equal Time, one of the gay newspapers in the Twin Cities. I even went approached her one year at the Pride Festival to tell her what a fan I was. I loved Fun Home but haven’t read the companion Are You My Mother? yet.

Benary-Isbert, Margot – The Ark (completed)
Benary-Isbet, Margot – Rowan Farm
I’ve written before about how much I loved The Ark as a kid and the incredible tale of how I came to own this copy and its sequel.

Bennett, Alan – The Uncommon Reader (completed)
One of the best books ever written. If you haven’t read it, I’m just not sure we can be friends. Well, yes we can, but you need to read it.

Berry, Wendell – A Place on Earth

16 thoughts on “shelf by shelf : from Bates to Bowen”