With this, my third installment of Shelf Esteem, I continue my voyeuristic, bibliophonic, mania.

I had a little incident this week where I beat the crap out of my malfunctioning scanner/printer. It is a pity that electronics’ manufacturers (and consumers) think that one needs to have extra features to justify higher prices. I would be happier paying more money for fewer features if it meant higher quality and reliability. But those aren’t really words that fit into the disposable, just try and get it fixed, world of consumer electronics. Thankfully, I scanned all of my Shelf Esteem images a few weeks ago so I have plenty of images to share until I find a scanner/printer that won’t cause me to go nutso. 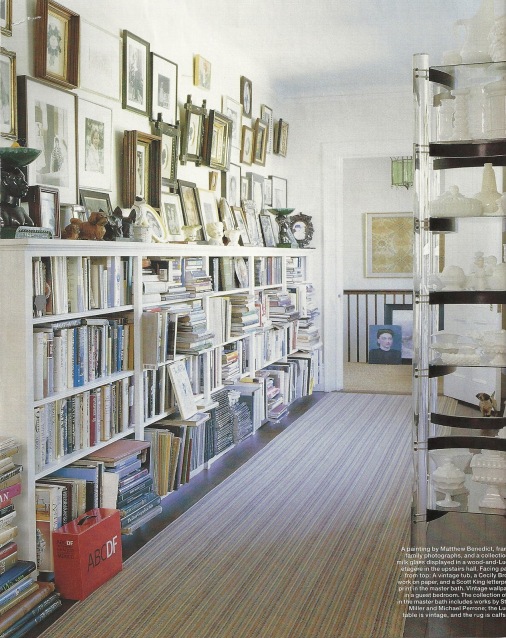 Cozy Factor: High. I don’t necessarily think that clutter equals cozy, but in this case it does. And even without a place to sit, I still find this one very inviting. I can imagine myself sitting on the rug combing the shelves.
The Books: Lots of art books, and midway down on the bottom shelf, those look like they might be auction catalogs. I love how the one book in the second bay is on display by sitting on top another book shoved in below. I am curious about the giant, red Graphic Dictionary of Mexico City sitting on the floor in its own handled carrying case. The stack at the very left in the photo has the autobiographies of both Bill and Hillary Clinton. Among the non-fiction on the shelves I spy Martha, Inc (a tell all about Martha Stewart) and The Female Eunuch by Germaine Greer. The fiction I can see includes Ragtime, White Noise, Queenie, and The Witches of Eastwick. And one called The White Hotel by DM Thomas. Wikipedia says this about it:

The Shelves: Good, basic, white painted wood. They look sturdy and allow for different size books. I would probably want them up to the ceiling, but then that  wouldn’t allow for all the junque on top. (I would also choose different junque and framed pieces, but the overall feel is right.)

Is this person a reader? I think so, but when it comes to fiction s/he seems to have stopped buying hardcovers in the 1980s.