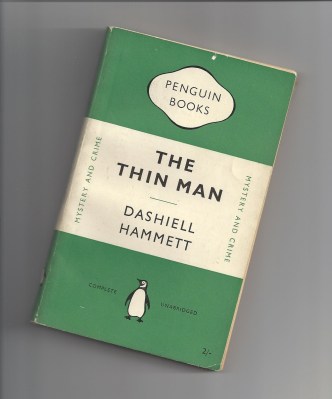 I don’t normally read much in the way of mysteries or crime fiction. I tend to find them a little too rat-a-tat-tat from one plot point to another. Granted, sometimes that kind of formula can be rather comforting to my linear way of thinking, but not too often. What I never find comforting, however, is that so many (most?) crime fiction is about murder. I am not so squeamish that I can’t abide reading about murder or other morally repugnant events, but most mysteries treat murder so nonchalantly it makes me wonder a bit.

Knowing that The Thin Man is a bit of a classic, I satisfied my desire to own a classic green Penguin by picking this up when we were in London in November. The book is the first written by Hammet starring the husband and wife team of Nick and Nora Charles. A dynamic duo who don’t let a page go by without having a cocktail. The book reads like an old black and white Hollywood film which is why I put the film version at the top of my Netflix queue. You know the kind of thing, speakeasies, gangsters, dames, and people named Studsey. The thing that attracted me was less the “glamour” of this world than the now archaic way of communicating–both verbally and technologically–and the effort to gather information. This was not the world of crime databases and Internet searches but rather good old fashioned gum shoe detective work. And don’t even think about civil liberties. Search warrant? Who needs it?

Although I did enjoy reading The Thin Man, I was a bit surprised that the many twists and turns melted down in the final five or so pages to a denouement that only barely tracked with the action of the preceding 178 pages. It is not that one should be able to predict the outcome of a detective story, but I certainly would have appreciated seeing Nick make some of the connections along the way rather than having everything miraculously explained all at once in the final minutes like some live action version of Scooby-Doo.

To paraphrase Gertrude Stein: for those that like this kind of thing, this is the kind of thing they will like.

10 thoughts on “Book Review: The Thin Man by Dashiell Hammet”