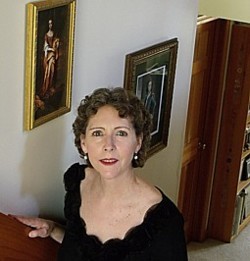 The Blogger Lunch
Last week in the midst of a visit by my sister, brother-in-law, and niece, I was able to have lunch with a New Hampshire-based blogger who was in town for a few days. A frequent visitor to DC throughout her life, Margaret Evans Porter was willing to give up a few hours exploring the city to meet up with me at the delicious cafe of the National Museum of American Indian at the foot of the Capitol. I think I originally came across her Periodic Pearls blog via Nan’s Letters from a Hill Farm. Margaret is a true Renaissance woman. A novelist with 13 published works and a former member of the New Hampshire legislature, Margaret has lived and travelled all over the place and really seems to embrace life long learning. And she has two of two of the cutest dogs on the Internet.

Buying Books
I have already chronicled my delightful Persephone Triple Play, but in the past couple of weeks there have been other book buying binges including a discount bookstore going out of business where I got 9 books for $18. And then I finally made my way to the Borders liquidation where I brought home a big stack about which I will blog in due time.  And then this weekend is the Bethesda-Chevy Chase High School used book sale. I have never been but I have high hopes.

Salman Rushdie is in love with his own celebrity (a personal account)
We have friends visiting from out of town who recently attended a dinner party with Salman Rushdie. Seated around the table were a bevy of university academics all set to engage in deep conversation with the literary giant only to be quietly mystified that the only thing Rushdie wanted to talk about was popular culture. One of my friends was seated next to him and is no slouch when it comes to popular culture. But he was surprised when it became clear that Rushdie’s only interest in popular culture was as it reflected on his own celebrity. The conversation was a one-sided litany of Rushdie’s many celebrity friends and the many terribly interesting things they said to him. The way my friend tells the story, it seems a little tragic that such an old geezer was trying so hard to be hip.

Seen on the Subway
Since there was a whole week when I didn’t commute I haven’t had as much opportunity to spot people reading. Add to this the fact that I was too into my own reading to look up much means I only have one example to offer this week. 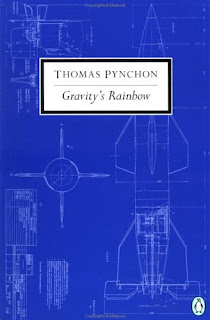 The Reader: The interesting thing about this reader is that I spotted him several weeks ago reading the same book and I am not sure he is making much progress. Even more interesting is the fact that both times I have spotted him he has actually been walking down the street reading the book. I would say he was mid-twenties with a Department of Housing and Urban Development (HUD) bag.

The Book: Since this walking reader had the front cover of his book folded back I could only catch a little triangle of a saturated blue. And the back cover and spine was the palest green. I instantly recognized it. The pale green was certainly a Penguin and the blue cover was the blueprint motif of Penguin’s edition of Gravity’s Rainbow. I have never read the book, but I never forget a cover.

The Verdict: I have been tempted in the past to give Pynchon a go, but lately I have come to understand that his style of writing is probably not for me. So I have put him, at least temporarily, in the Joyce-Faulkner pigeonhole of authors to avoid.

9 thoughts on “Bits and Bobs + Seen on the Subway”