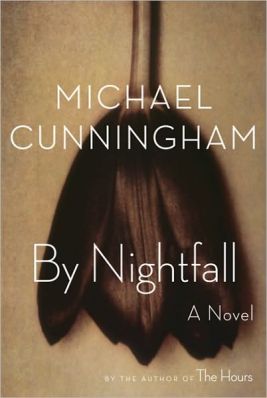 I have read all of Michael Cunningham’s fiction. I certainly don’t rank him as one of my favorite authors, but I do find his novels consistently interesting and well written. His earlier books are pretty standard family/relationship narratives. And I guess in many ways his more recent stuff is as well, but with decidedly more complex narratives that have a more conceptual, artistic bent. His big breakthrough novel was of course, The Hours which weaves together three narratives into one novel with Virginia Woolf’s Mrs. Dalloway as a unifying theme/element. And then Specimen Days which is more like three short novellas connected by Walt Whitman and the fact that each story has a man, a young boy, and a woman as the central characters. His latest novel, By Nightfall, harks back to his earlier fiction in that the narrative is much more straightforward, but its setting, deep in the heart of artsiest NYC, makes it feel more like the more cerebral Hours and Specimen Days.
In By Nightfall, 43-year old art dealer Peter Harris is going through a bit of a midlife, mid-marriage, and mid-career crisis. Unfortunately, I had read a review or two of this book before I read it so a few of the plot twists were spoiled for me. I won’t do that to you here. I think this is a book that I would have preferred had not been spoiled. Being about the same age as Peter, there were many moments in the book where I could quite understand his emotions (or lack thereof). Those moments where, no matter how much you know, how sophisticated you are, and how well you think you have things figured out, there are still things in life that leave you confused. Whole swathes of life and love where you are dangerously naive. And as with poor, dear Peter, there are still those moments when life can take you to your most vulnerable and then kick you right in the gut, and hard.
Some have complained that the milieu that Cunningham creates in this book–the world of contemporary art in New York City–feels like Cunningham is trying to show off. Dropping too many names and too many inside references. But I actually think that that uber-sophisticated world, with all of its high artistic and poetic ideals, is a perfect metaphor for the tumult in Peter’s head.
So much of art, whatever the media, is filled with ideas and ideals that make no sense in real life. People don’t really die of broken hearts, but look at how much music would have you think so. People don’t often sacrifice their whole lives for another person or a high minded ideal, but just think of how many novels or poems would have you think so. And how many of us in our day-to-day lives feel the elation or the despair that so many painters capture on canvas? Not many of us could really say that these kinds of artistic fictions are the basis for our lives, but I think most of us can point to when they were true for a minute, for an hour, for a month, at least in our heads. And so it goes with Peter. All of the tragedy and joy of art is about to explode in his real life. He himself wonders if it can really be that way.

And then the flip side of setting Peter in this world is the contrast of perfection and high ideals with the baser side of human experience and emotion. Sometimes something beautiful comes out of something messy and ugly. And sometimes there is nothing seemingly profound in art at all–it is born out of base sexuality, greed, or vanity. But even those can create something that transcends the sum of their parts.

I am not saying this is a brilliantly written, perfectly wrought novel. There are more than a few themes that didn’t really pull together for me. But it did at times tap into something very emotional for me. And anyone who can get me to see Damien Hirst’s ridiculous shark in a tank in a new light is doing something worth looking into.

8 thoughts on “Book Review: By Nightfall by Michael Cunningham”