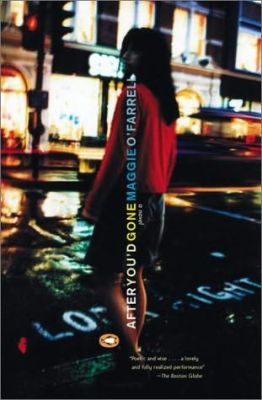 The kind of book that makes you miss your subway stop…

2010 is turning out to be the year of Maggie O’Farrell on My Porch. In 2009 I had attempted to read The Vanishing Act of Esme Lennox but there was something about the shifting narrative that made it temporarily unattractive to me. But then this past January when we were Thailand another O’Farrell title (The Distance Between Us) was in the resort library, I picked it up and ended up loving it. So then I went back to Esme and loved it. And then O’Farrell’s latest book, The Hand that First Held Mine, came out and not surprisingly I loved it as well. So now I have moved on to her first novel After You’d Gone, and yes, once again love was in the air. As regular readers know I am prone to hyperbole so I throw around the word “love” a lot. When I analyze this love for O’Farrell’s novels it becomes clear that I don’t love O’Farrell’s books in the sense that they are life-altering works of genius. But they are extremely enjoyable reads, the kind that make you want to stay in bed all day and read it from cover to cover. The kind of book that makes you miss your subway stop.

Now that I have read 80% of O’Farrell’s five-book oeuvre, I feel safe in saying that she loves to play around with shifting narrative. Both backwards and forwards in time but also from different points of view. And the various threads eventually all come together in sometimes surprising, and always intriguing ways. I was somewhat to see O’Farrell use this approach in her first novel. I guess part of me was thinking that one had to work up to that kind of narrative complexity and that her first would be more straight forward. I think I was somewhat disappointed, like this whole interwoven thread thing was a little gimmicky. It is a good gimmick, don’t get me wrong, but I began to wonder if she is capable of something more straight forward. Would I even want her to try? That her first novel doesn’t do it as expertly as later novels may be why the notion came into my head at all. But ultimately for me this is a quibble.

For those of you who need more than abstract ramblings to entice you into reading a book let me try and summarize the plot. Alice is acting odd, gets hit by a car, ends up in coma. Too succinct perhaps? In the process we learn all about her childhood and her love life, her family dynamics, and we actually get some narrative from the comatose Anna. Still not enough? Edinburgh, London, love of her life, family secrets. And sex! Did I mention sex?! O’Farrell’s description of Alice’s sex life was positively male in its somewhat graphic, horny, honesty. If William Styron had written it, it probably would have annoyed me. But from a female writer it was kind of refreshing. Or it may have something to do with the objects of desire. I can identify with O’Farrell’s interest in men, while Styron’s raunchy desire for Sophie left me cold. Maybe this is why straight men tend not to groove on “lady authors” as much as I do. Could it be as simple as that?

9 thoughts on “Book Review: After You’d Gone by Maggie O’Farrell”