All the recent posts in the blogosphere about the American Library Association conference here in DC have gotten me thinking about my own relationship with libraries.

The Early Years
When I was a little kid I practically lived at the library. About the time I was seven years old, a brand new library opened just two blocks from my house. I was well aware of it even before it opened because my older brother had been assisting the construction workers by making trips to the Dairy Queen for their lunches, scoring himself DQ treats as payment for his efforts. Don’t think I wasn’t jealous of that. And when the new building opened it was like a revelation. At that point the books themselves were somewhat secondary to my interest in the new facility. It was this big (to me) modern (to me) building the likes of which I had never really been in. It was a dark brown brick building with a curving wall, giant doors, and what seemed like acres of bright green carpet apparently meant to suggest grass. Growing up in an old house that was perpetually being remodeled in the old part of the small town of Elk River, Minnesota, the new library was like a fantastic spaceship. And I was just old enough to make the short trek all on my own.

The children’s area was astounding, they had coat racks in the shape of giraffes, this great play set based on Richard Scarry characters, bean bag chairs–it was like kid heaven. It is surprising that I even noticed the books. But notice I did. As I sit here today I realize that over time I worked myself counterclockwise through the library’s fiction collection. Every few years or so moving generally west through the stacks from the ‘E’ section (easy? Elementary?) to ‘J’ (juvenile) to ‘YA’ eventually to ‘A’. In those days I didn’t ignore non-fiction the way I do now, maybe because kid’s non-fiction has all those great pictures and drawings. I would spend hours browsing paging through anything that looked interesting. Including a book on human reproduction that I still remember to this day:

Part of your father fit inside your mother like a key in a lock, like a foot in a sock.

And of course there were also the programs: reading programs, summer films (pre-video), hobby night, and many others I know I am forgetting. When I was still quite young, Janet, the librarian in charge of children’s programs, created this giant Dickensian holiday street scene to go up on the wall in the children’s area. It was like one of those advent calendars where there is a window that opens for each day until Christmas. Except it was giant, it had to be at least eight feet tall and covered the whole wall. My friend Jeff and I were lucky enough to be able to help Janet do some of the coloring which we loved. We were rewarded by being included in the Victorian vignette as little carolers. Despite being over the moon about this at the time, I oddly did not remember it until recently when I came across this picture in my parent’s photo album. I am the one on the left.

Not Making a Living on the Wages of a Library Page
When I was eleven my sister got a job at the library which I thought was the coolest thing ever. Five years later when I applied for a library page position of my own I thought I was a shoo-in. Not only was I a sibling legacy, but I knew that library backwards and forwards. I knew the Dewey decimal system not because I studied it, but because I knew every single book on the shelves and where they were located. And there wasn’t an element of the collection that I hadn’t used over the previous nine years. Periodicals, the A/V collection, every section of books, the catalog on microfilm, the inter-library loan system. I knew it all. I even knew more than I should about romance novels having indulged my OCD on more than one occasion by surreptitiously organizing the twirling racks of mass market editions by publisher and the color of the spines. So imagine my surprise when I didn’t get the job! The head librarian was new and not someone who had known my years of hanging out at the library. He hired someone a year younger than me on the notion that they wouldn’t graduate from high school as soon as I would. I was crushed. Not only because other job prospects weren’t so hot, but this was MY library. Well, after a week the other guy didn’t show up for work. I happily stepped in on short notice when the call came and needed almost no training whatsoever.

It was during my two years working there that I really began a relationship with books and other book lovers. I had always been a reader, but this was the first time I had the chance for adult-like conversations with colleagues and patrons about books. And what great friends I made while working there. A wonderful woman named Mick (short for Margaret) eventually replaced the head librarian who hired me and children’s programs were taken over by a kind, creative, bubbly woman named Georgia Jones who for some reason always made me think of a young Connie Francis. We had so much fun it was astounding. Probably the best work mates I have ever had. With the books, the gossip, and the giggling, I didn’t mind that I was only making $3.25 an hour. Unfortunately my career at the Elk River Public Library was cut two months short. Needing to make more money the summer before I went off to college I ended up working at a Sanford and Sons, a potato farm in nearby Big Lake where I would make a whopping $3.75 an hour and get many more hours than my 20 hours a week at the library. Needless to say, working at the potato farm was not as fulfilling as working at the library.

Oh, the Libraries I Have Known

The place where it all started: The old “new” Elk River Public Library. They have since closed this library and opened a bigger one out on the highway in a location that no 7-year old is going to be able to walk to.

And who couldn’t like the library system at the University of Minnesota where I went to college. With almost 7 million volumes in 14 collections, it is a treasure trove I still miss.

The Holborn Library, not a fantastic library but it was my local back when I worked in London in 1992.

An old Carnegie Library, the Hawaii State Library in Honolulu was a great place to hang out during my two years in graduate school at the University of Hawaii. This was the place where I would head for pleasure reading as soon as the semester was over and the place where I first met Willa Cather, Vladimir Nabokov, James Baldwin, Leo Tolstoy and many others. A real time of discovery in my mid-20s.

The libraries at Cornell University in Ithaca, New York were of course wonderful but I didn’t spend as much time in them as you might think while I was in graduate school there. I was studying Regional Planning and much of the data we needed in our studies and research was available online by the time I was there in 2000. Still there were a few wonderful places to immerse myself in books. 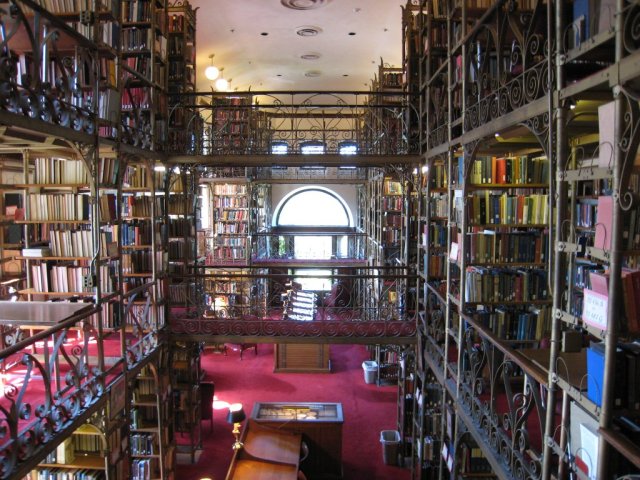 And then the sad case of Washington, DC. I haven’t yet checked out the branch in my new neighborhood, but my experience with DC libraries has been less than gratifying. The main library is a Mies van der Rohe building that has seen better days and always feels more like a homeless shelter than a library. I think the majority of folks in this very highly educated part of the country must be buying all of their books.

Of course there is always the Library of Congress which is an unbelievable resource, but not one that one uses for anything other than serious research. Unfortunately, between the sad state of libraries here and the fact that I have been buying so many books in recent years, I don’t go to the library very often these days.

19 thoughts on “My Life at the Library”