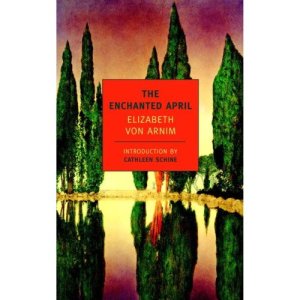 I remember seeing the trailer for the film adaptation of this book when it first came out in 1992. It looked right up my alley. A period film of the English in Italy, had echoes of “A Room With A View”.  But for some reason over the last 18 years I never bothered to see it.  And then recently I came across a nice used copy of the NYRB edition and thought the time had come to give The Enchanted April a whirl.

The story begins with Lotty Wilkins having a miserable February day in rainy London. She notices an advertisement for an Italian house (castle) rental in the Times with the heading: “For Those who Appreciate Wistaria and Sunshine”. She becomes obsessed with the idea of spending a sunny April in Italy and manages to convince Rose, a woman from her club and church, whom she hardly knows, to split the cost of the rental. To save money the two decide to advertise for others to share the castle and end up with Mrs. Fisher a older widow who had a childhood filled with Ruskin and Carlyle and Robert Browning (literally, her father knew all these “great men”) and just wants to spend her time at the castle being left alone to “remember” better times. And with Lady Caroline Dester a 28-year old beauty who also wants nothing more than to be left alone.

So off they go to Italy where indeed the sun is shining and everything is more beautiful then they had imagined. It isn’t long before Lotty’s infectious enthusiasm melts Rose’s defenses and while it takes a little longer, eventually does the same for Lady Caroline and Mrs. Fisher. She credits the house and Italy with transformative powers, but it is clear that Lotty has just as much to do with the transformations as the house.

Throughout the story there are wonderful moments of light humor. Not roll on the floor kind of humor but genuinely funny moments that make one chuckle in delight. Perhaps my favorite instance is the struggle between Rose and Mrs. Fisher for dominance of the over the tea pot and who is serving whom. Over the course of the book each of the women are rescued from their personal despair by letting go of their ingrained old notions of themselves and their relationships and embracing a new attitude.

I really enjoyed reading this charming book, the same can’t be said for the film, which I watched almost immediately after finishing the novel. There was some good casting–Miranda Richardson as Rose and Joan Plowright as Mrs. Fisher–but the other two weren’t so great. The actor portraying Lotty way overplayed her character’s quirkiness. I think given the reserve of the other characters her words alone would have been shocking, she didn’t need to make everything sound like an over excited twelve year old. And the actor who played Lady Caroline, well, she had the wrong color hair and wasn’t the knock down beauty the book promised. But even these miscastings could have been overlooked if they hadn’t taken a few liberties with the plot that in my opinion dumbed down the story in a way that seemed unnecessary. And they used way too many fake flowers to make the gardens seem over the top beautiful. Merchant-Ivory never would have made that mistake.

So, a hearty “yes” to the book, and a hearty “maybe if you are bored” to the film.