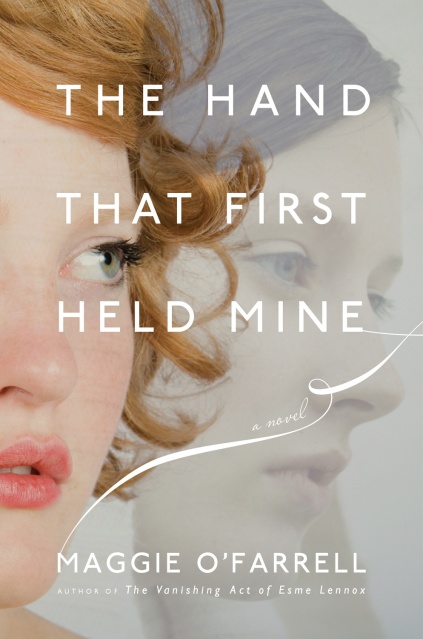 The Hand That First Held Mine
Maggie O’Farrell

Maggie O’Farrell is the master of weaving together seemingly disparate storylines that eventually come together in ways the reader doesn’t expect. As I read O’Farrell’s latest, there were more than a few times I thought for sure I knew where things were headed only to find out I wasn’t as clever as I thought I was. In The Hand That First Held Mine there are fifty years separating the two storylines of two unmarried mothers. Lexie Sinclair is a journalist finding her way through 1950s and 1960s London while Elina Vilkuna is a Finnish-Swedish artist living with her boyfriend in the same city a half century later.

Following Elina’s story, I was a bit worried at first that this was going to be a “baby” novel—one of those books that make those of us without a functioning uterus (or access to one) begin to yawn as we suffer through endless stories about how we can’t understand X, Y, or Z because we have never been a parent. But Lexie’s early, childless story kept me interested until Elina’s gave way to something more interesting (to me at least) than the emotional and physical aftermath of her life-threatening C-section and the colicky unhappiness of her screaming baby. But then again, I am a sucker for a coming-of-age story and Lexie’s story certainly qualifies in that category, so it is no surprise that I was more drawn to her as a character. (UPDATE: perhaps coming-of-age is somewhat misleading, given that she has already been at university when the action begins, it might be better described as a coming-into-her-own story…) In some ways Lexie’s story has some superficial resemblance to Jenny in the wonderful Oscar-nominated film An Education. Like Jenny, Lexie is a promising young student who seemingly gives up her chance at success when a fascinating older man comes along to deliver her from the genteel tedium of her middle class life.

Even if I didn’t hate writing plot synopses, I wouldn’t give you one here. O’Farrell’s fascinating story has too many twists and turns making a spoiler-free synopsis almost impossible. The characters are believable and interesting and developed enough that, with perhaps one or two exceptions, they all elicit empathy at one point or another. And the art world that O’Farrell describes is fascinating and name droppy without seeming even remotely forced or pretentious as can be so often the case with such attempts. And any disappointment that I may have felt when the comeuppance that I was so looking forward to didn’t really happen, was supplanted by a rather joyous final scene that was much more interesting.

If you haven’t read anything by Maggie O’Farrell you really need to. And if this particular O’Farrell sounds good you are going to have to wait until April 12 in the US or April 29 in the UK to get your hands on a copy. But it will be worth the wait.

***I have never before accepted an Advanced Reading Copy (ARC) for any book. But I had been so taken with O’Farrell’s The Distance Between Us that I was hard-pressed to say no when the folks at Houghton Mifflin Harcourt offered to send me this one. And since then I have also read O’Farrell’s The Vanishing Act of Esme Lennox which I also enjoyed and which added to my high expectations for The Hand That First Held Mine. In some ways though, having accepted the ARC I had a big chip on my shoulder. I was worried that I might lose some objectivity–not wanting to bite the book hand that had fed me this particular novel. I spent the first hundred or so pages trying desperately to find fault with the book. It was like my brain had been hard wired to dislike it, just because some folks at HMH were hoping that I would like it. But after a while O’Farrell’s easy prose and compelling story telling got the better of me and I found myself unable to put it down.***

11 thoughts on “Book Review: The Hand That First Held Mine by Maggie O’Farrell”