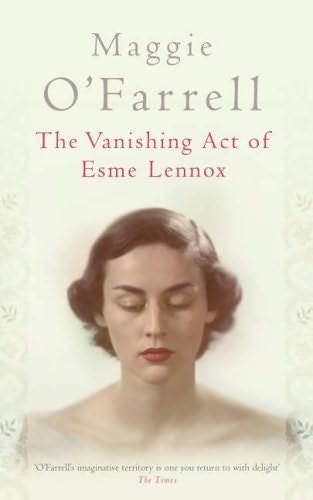 Months and months ago, a book club friend of mine had fantastic things to say about The Vanishing Act of Esme Lennox. And our reading tastes are generally quite in line with each other. But for some reason I just couldn’t get into it. But then back in January when we were in Thailand I stumbled upon O’Farrell’s The Distance Between Us in the library of our resort and ended up loving it. So when I came across TVAEL in a secondhand bookshop in Philly last month I decided I needed to give it another chance.

In a nutsell the story is about vintage clothing store owner Iris Lockhart finding out that she has a great aunt named Esme Lennox she didn’t know about. More startling to Iris than the fact that no one in her family had ever mentioned this great aunt, Esme has spent the past 60 years in a mental health facility. But Iris’ incredulity is stretched to the limit with the knowledge that she is Esme’s only blood relative still alive. After some hesitation, Iris starts to do the right thing and takes responsibility for Esme.

I wanted this to be a warm, uplifting story of the the two women discovering themselves as they discovered each other. And especially to see Esme discover the real world after 60 years of incarceration.But alas, this tale is a shade or two darker than that. I won’t say more about the plot so as not to spoil it for anyone.

(For about seven years now, I have been associated off and on (and most recently back on) with the redevelopment of a large, disused, historic mental health facility campus. Some aspects of TVAEL really made me stop and think about the thousands of souls, both sane and insane, who have lived there).

I enjoyed reading the book and it certainly gives food for thought. But in the end I think my expectations about the book’s plot got the best of me. I think TVAEL is probably a better book than The Distance Between Us from a literary standpoint, but I enjoyed the latter much more than the former.

3 thoughts on “Book Review: The Vanishing Act of Esme Lennox by Maggie O’Farrell”