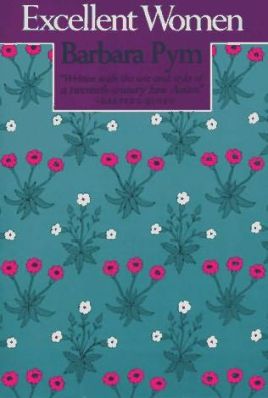 There are three things that make Barbara Pym’s world foreign to me. Not the English part, I have been inhaling all things England since I was 11. And not the clerical milieu, I grew up next door to a parsonage and became very familiar with the life and work of a protestant clergy family (despite having been raised Roman Catholic and having spent lots (and lots) of time at an RC church across town).

Now that I think about it, the three foreign things are kind of related to the two mentioned above. First, food. Perhaps it is the 1950s setting of Excellent Women that has our heroine Mildred Lathbury eating sad little meals because of lingering food shortages in the wake of World War II. And the War experience at least in my mind, is quintessentially British, so that might all be part and parcel of the whole English-ness of the book. (Don’t worry, I’m not using British and English interchangeably…)

Second, and this I guess must also relate to post-war circumstances, housing shortages. I have lived in some pretty, er, Bohemian settings over the years, but none of them ever required sharing a bathroom with another apartment—College dormitories don’t count. The fact that grown adults in the industrialized world had to consider such housing arrangements is indeed foreign to me.

Third, religious intolerance. Granted religion and other aspects of familial, civic, and political life have always mixed in a rather unholy way. But I think I must have grown up in an ecumenical atmosphere. Personal animus related to religion was not really an acceptable position either at home or next door at the parsonage. And whenever my parents would talk about the old days when marrying outside one’s faith was a huge deal that had broken up families, etc. it was always in the context of thank goodness we’re not like that. I don’t think Mildred Lathbury in Excellent Women is intolerant, but she certainly is surrounded by lots of parochial thinking that is as off putting as it is foreign to me.

In essence Excellent Women is about those excellent women who keep things moving. They make tea, they comfort, they volunteer, they are trustworthy and can be depended upon. But they don’t get married. And, as in Mildred’s case, they often get taken advantage of by the coupled and the male. More than once I wanted Mildred to flip them all the bird and tell them to do it themselves.

Excellent Women is vintage Pym with some darker overtones than earlier works like Some Tame Gazelle (which remains my favorite Pym). And having recently read a bio of Pym certainly heightened my enjoyment and understanding of the work.