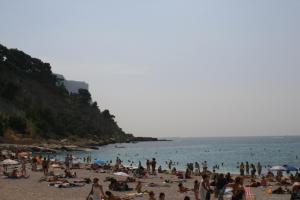 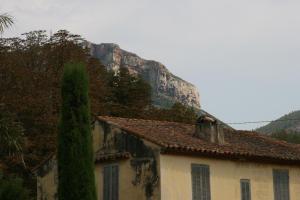 Our first full day in Provence we decided to hop in the car and go take a look at the ocean. It seemed silly to be so close to the Mediterranean and not go say hello. So we asked the friendly staff at the hotel for a good day outing and they suggested Cassis. My only knowledge of Cassis is that it was a flavor of sorbet offered at Haagen-Dazs back when I worked there in college in 1987. And I guess I knew that it was also a liqueur made from red currants. But that was it.

It was definitely the right day to be at the beach. Hot, sunny, and kind of humid. The only problem was that we really didn’t have all the basics for a good day at the beach. We had swimsuits, sunscreen and sunglasses, but no towels. I lived in Hawaii for two years, I love the beach and am not afraid of sand. But, I don’t like trying to be tourist and beachgoer on the same day. Unless you have a giant bag allowing for change of clothes and a clean, dry, place to change, shower, get rid of the sand, etc. it just seems too darn messy. Plus we had to get on a crowded shuttle bus to get to our car, and we had plans to go to Aix-en-Provence later in the day. It was just all too much. And the humidity had me cranky. I was hoping I had left that behind in DC. In the end John got in the water and I merely waded in up to my short line. Refreshing, but not as satisfying as a day at the beach. Next time I won’t try and cram touring in on a beach day. And we would have thought of towels before we got to the beach and they were charing 22 Euros for ugly touristy beach towels.