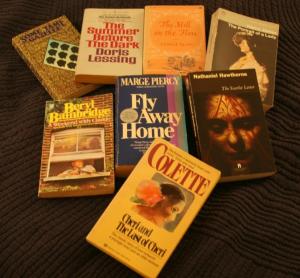 In no time we will be wending our way through the Loire Valley, Provence and the Bernese Oberland. We plan to eat lots of good food (that is until we get to Switzerland where I am not sure if the food will be too good), drink lots of wine and enjoy not being in the humid, humid environs of Washington DC in August.

When I travel long distances I like to buy used pulp paperbacks to read along the way so I can leave them behind when finished, and so they take up as little room and weight as possible. With that in mind I had to set aside the enormous “to be read” pile and actually go buy some good pulp editions to take with me on the trip.

So what do you think, will 8 books be enough for 16 days? Part of me thinks yes and part of me thinks no. Certainly the long plane ride and a few train journeys will give me ample reading time. I always over pack on the book front. It is not like I will really read 8 books in 16 days. I am just always worried that I won’t have the right book for the right mood. Stuck on a plane for 8 hours with a good book, but one I am not in the mood for. So I overcompensate by bringing a little of everything.

The other thing is that reading is a great way to soak up a place. It doesn’t matter what you read, it is just the fact that it slows you down enough to sit and experience a place. When I first met my husband he thought I was crazy. Whenever we went somewhere beautiful (Grand Canyon, Tuscany, Paris, etc.) I would want to sit down and read. But then he realized that I would read for a bit, looking up now and then, maybe move to another vantage point, stop and read a little more. It turns something that might have ended up just being a too-quick photo op into something a little more meaningful. Kind of like the touristic equivalent of slow food.

I toyed a bit with doing a French and Swiss thing when choosing books, but that was a little more effort than I cared to take. So, without further delay, here is the Summer 2009 literary cast that will be travelling with me:

The Mill on The Floss by George Eliot
I have never read anything by George Eliot and felt like this might be the right time to start. I have already primed the pump and am about 80 pages in and am quite enjoying it. Not sure what I expected, but it is more amusing than I would have guessed.

The Scarlet Letter by Nathaniel Hawthorne
Another classic I have never read. Thankfully I never saw the Demi Moore film version. I heard it was terrible and that if she had adapted Moby Dick for the screen Ahab would have killed Moby instead of the other way around.

The Portrait of a Lady by Henry James
I haven’t had much luck with Henry James. I had to read Washington Square twice in school, but other than that I haven’t been able to get through a James novel. I feel like I really should like him. I love Edith Wharton and folks tend to mention the two in the same sentence fairly frequently. But I have never really been able to get into James. But I thought I would give it a go. And with an opening line about the ceremony of afternoon tea, Portrait of a Lady seemed like it might the one to break through my aversion to James. Here’s hoping they have lots of tea to sustain my interest.

A Weekend with Claude by Beryl Bainbridge
I know nothing about Bainbridge, and I really hate the cover image on this edition, but there was something about the first paragraphs that made me decide to give it a go. Fingers crossed. In any case it is nice and short.

Some Tame Gazelle by Barbara Pym
I have read a few other Pym and found that she can be relied on for an amusing time. Very English, very right up my alley. According to the book jacket, this was her first novel published in England but the last one of hers published in the USA. Another shortish book.

Fly Away Home by Marge Piercy
I have read two other of Piercy’s books and really liked them. They have been contemporary, easy reads that have female protagonists getting their lives sorted out in one way or another. I love a good personal transformation story and I got sucked in by this synopsis: “Successful Boston cookbook author Daria Walker, whose greatest pleasures are her home and family–and who loves her husband deeply–is devastated to learn he wants a divorce. Now she must put her life back together…”

Cheri and The Last of Cheri by Colette
This is my one French book. I read The Ripening Seed earlier this summer and enjoyed it, so I thought I would give Collette another try.

The Summer Before Dark by Doris Lessing
Yet another author I haven’t read. Since she won the Nobel in 2007 I figured she was worth looking into.

There wasn’t much method to my madness in choosing these books. Most of the used bookstores near me specialize in trade or hardcover fiction and don’t have much in the way of literature in pulp editions. So I took what I could get. But I actually think it is a good, diverse bunch o’books that I am looking forward to reading.

How about you?
How do you choose your travel books? Do you take too many when you travel? Do you try to match your book choices up with your destination? Have you ever “found” a book where you were staying that became one of your favorites?

8 thoughts on “Look Out France and Switzerland, Here I Come.”