Philly’s hometown boy, Thomas Eakins is well represented at the Philadelphia Museum of Art. He did many portraits throughout his career but is perhaps best known for images of the male form (rowing, wrestling, etc.) and a few large works depicting medical lectures such as the The Gross Clinic and The Agnew Clinic. The photo below of The Agnew Clinic is just a detail of the much larger painting. The major action in the painting (shown in the detail below) very dramatically takes place in the lower right corner of the canvas. The lecturer (not shown in the detail) is similarly illuminated as the surgeons, but is off to the left away from the action. The steeply raked rows of observers fill most of the painting and provide a darkish background that makes the surgical team and, to a lesser degree, Professor Agnew almost glow on the canvas. 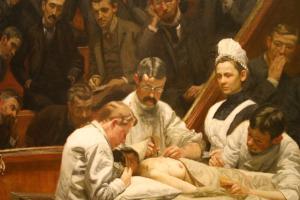