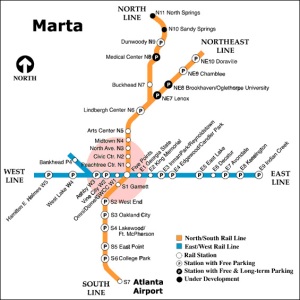 I am a reasonably intelligent human being who has used public transportation all over the world. So why did I feel like such an imbecile trying to navigate Atlanta’s MARTA? Jet lag perhaps? (You know the time difference between DC and Atlanta is so huge.) No, I think it had something to do with the god-awful signage the brilliant folks at MARTA have decided to put up and perhaps even more because of the god-awful signs they haven’t put up. As you can see from the map above, there are only two lines that make up the MARTA system. Shouldn’t be hard should it? But it was. The London underground is infinitely more complex but it’s superior signage makes it nearly impossible to get lost or even confused on that system. Yet MARTA had me cussing out loud as I changed trains and stepped onto a platform completely void of any kind of information that would have indicated that I was in the right place. The screeching Mariah Carey Christmas music did nothing to improve my mood. Don’t get me wrong, other metro systems have poor signage, but none as worthless as the stuff in Atlanta.