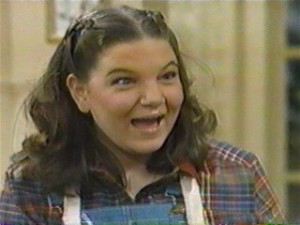 Recently I discovered that episodes of The Facts of Life are available “on demand” along with other (bad) classics like One Day at a Time, Silver Spoons, Fantasy Island and others. After watching a few episodes of TFOL I was struck by how bad the show is. The writing, the plots, the acting are all awful. Was everyone brain dead in the 80s? Don’t get me wrong, I loved TFOL when it was on the air. I guess my excuse had to do with being a closeted 7th grader who wanted to go to a private school in Peekskill where boys (aka the bullies who made my adolesence hell) were nowhere to be seen. But I would assume that actual adults were responsible for the content and execution of TFOL. I am not sure what their excuse was for making such a bad show.
Having said that, Natalie, played by the ever-perky Mindy Cohn, was the only thing that gave the show any kind of humor or intelligence. She was heads and shoulders above the rest of the cast in terms of acting ability as well. I think what worked for Natalie was that she had some sense of comedic timing and verbal slapstick. It is kind of like Happy Days vs Laverne and Shirley. Decades later Happy Days is boring, preachy, overly sweet, and not funny. L&S on the other hand still has some real gut laughs thanks to the slapstick skills of Penny Marshall and Cindy Williams.
I don’t really have a point other than to say Natalie was my favorite and still is 25 years later.