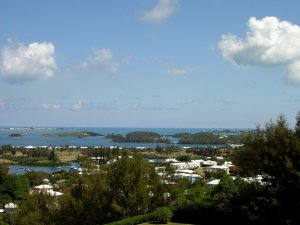 I am beginning to feel like I am bringing bad luck to my vacation destinations. Since we visited Northern California in May the wildfires there have wreaked havoc including one that is doing untold damage to Big Sur. We have our fingers crossed that Deetjen’s Big Sur Inn will survive.

And now, just a week after our trip to Bermuda, Hurricane Bertha is bearing down on the island. What people do in a location like that when a Hurricane shows up I have no idea. It didn’t really seem like there was anywhere for residents to flee to.

These pictures were taken in the Southern part of the island where the majority of the best beaches are. Also the scene of a disappointing snorkeling expedition. First, there wasn’t really much to see underwater. I think I saw maybe four fish. Apparently Bermuda is better for divers who like exploring shipwrecks, but being so far north in the Atlantic the reef life was pretty boring. But perhaps the worst part of the expedition was a vomitous boat ride out to the reef. The combination of being in the sun in a wet suit and the rocking of the boat made this snorkeler more than a little queasy. The embarrassment of hurling over the side of the boat in front 20 other people was mitigated by the physical relief in doing so.

One thought on “Bermuda Part II: Get Lost Bertha!”