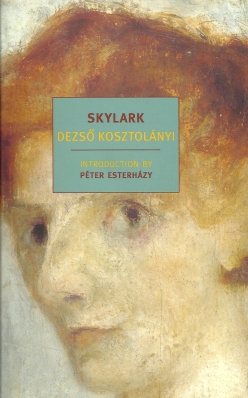 Skylark is a wonderful example of why I like New York Review Books Classics. A long forgotten novel first published in Hungary in 1924 is one that would be hard enough to find in a library let alone a bookshop. But thanks to NYRB, there it is just waiting for someone like me to pick it up and read it. I love Penguin Classics, but c’mon those are the greatest hits or in some cases the B-sides* of well known authors. NYRB has a few B-side novels in their catalog, but more than anything they have a lot of A-sides by authors who have long passed out of popular consciousness. The literary equivalent of reissuing hits of long forgotten one-hit wonders. Keeping in mind of course that many one-hit wonders have a back list that may not have been popular but is still eminently worthy of attention.
Another reason I like NYRB Classics is because they often take me out of my emotional, geographic, and topical comfort zone. And so it is with Skylark.
Skylark Vajkay is an unmarried 35-year old woman living with her parents in a provincial city in Hungary around 1900. The three Vajkays live a rather sedate, abstemious life. The opening chapters rather charmingly describe preparations for Skylark’s trip to spend a week with relatives in the country. Although Skylark processes some very complex emotions and is alternately playfully humourous and gut-wrenchingly sad, its plot arc is rather simple. With the complete action of the book’s 221 pages taking place over the course of just one week, it is somewhat hard to describe much about this book, let alone its plot, without giving too much away.
Suffice it to say that Skylark and her parents learn much about themselves and each other while she is away in the country. In that short period Kosztolanyi manages to distill 35 years of the Vajkay’s family dynamics and explore some of their deepest feelings about themselves and each other.
The sentence that follows this one and the rest of the paragraph are very spoiler-y in nature. I must admit I was heartbroken that the character transformations were ultimately arrested, and that nothing was left in the end but despair. The happy, or at least amusing, ending that seemed to be in the works was not to be. Yet the unhappy ending retroactively gave the rest of the novel a depth that made the book much more compelling for me than it would have been with a happy ending.
Not my favorite NYRB, but definitely worth reading. And one that I like better the more I look back at it.
*For those of you born after 1980 and who don’t understand the “B-side” reference: Once upon a time popular music songs were released on small vinyl disks that played at 45 revolutions per minute on what was called a record player. The hit song was the song on side “A” of the disk. Depending on the artist’s output, the song on the “B” side didn’t often achieve the popularity of the hit on the “A” side.