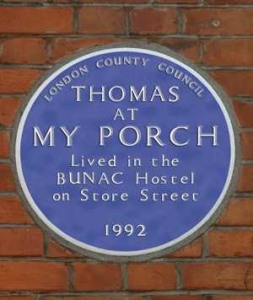 Darlene over at Roses Over a Cottage Door posted a picture of a London Blue Plaque that her mate (?) made for her. Thankfully she also included the link to blueplaque.com so I could waste um…I mean spend all morning making plaques for friends–most of which can’t be displayed here to protect the guilty.

So I decided to commemorate the time I spent living in London in 1992. I worked as a front desk clerk at the Sydney House Hotel in Chelsea, but I shared a room with three others and a kitchen with 27 others in the BUNAC Hostel on Store Street just off of Tottenham Court Road. It was just up the street from Senate House at the University of London and just a stone’s throw from Charing Cross Road. 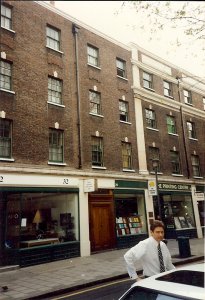 I have no idea who the startled businessman is.

These glasses were pretty bad, even for 1992.
I look like the character that Andy Millman (Ricky Gervais) plays in Extras.

16 thoughts on “The Best Way to Waste Time. Ever.”